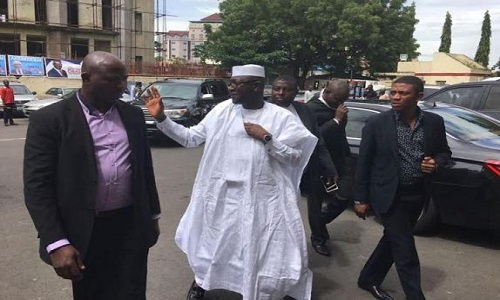 Leaders of the All Progressives Congress (APC) yesterday met with the recently sacked chairman of the House of Representatives Appropriations Committee, Abdulmumin Jibrin, at the party’s secretariat in Abuja, over the unfolding budget padding scandal in the green chamber.

The party had in an August 1, 2016 letter summoned Mr. Jibrin following its inability to reach him via phone call and sms.

But the lawmaker representing Kiru/Bebeji federal constituency on the platform of the APC said on Tuesday that he could not be reached because he had gone underground to avoid an “attempt by quartet of Speaker Dogara and others who were determined to kidnap me”.

Mr. Shuaibu said the party had already met with the Speaker of the House, Yakubu Dogara, whom Mr. Jibrin accuses of padding the 2016 budget.

He, however, said the party was not in a position to pass judgment on the allegation and counter-allegations.

He also denied that the party was planning to sanction Mr. Jibrin for his unrelenting media campaign against Mr. Dogara and others.

“There is nothing like passing any judgment on any member of the party”, Mr. Shuaibu said. “We only play our role as the umpire in this matter to see how we can create some atmosphere of peace and unity among our members”.

He continued, “I was reading today in your paper that we called him to discipline him; discipline him on what? Whatever happens in the House of Representatives or the Senate under the constitution and their rules, they are immune.

“But when certain things go, of course, the party needs to call its members to know how best to unite any feuding members and that is exactly what we did.

“I want to say what we discussed honestly speaking was to get a better brief because we have to be carried along. They are our members, we should know from them directly what is really going on, so that we can see how we can handle the situation without necessary making it a town square dance”.

The deputy national chairman stressed that the party would continue to engage Dogara and Jibrin, who are APC members, suggesting a peace deal had not been brokered yet.

“We are discussing with them and it is an ongoing consultation. We are not done with them, we sat with the speaker; we just finished sitting with him (Jibrin) and we would continue to sit.