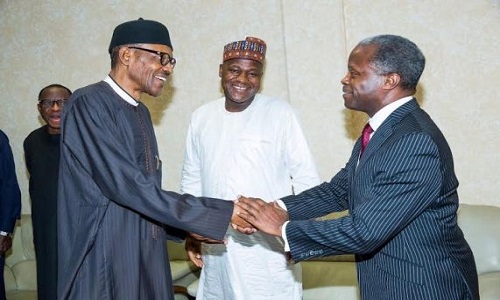 President Muhammadu Buhari on Friday had a closed-door meeting with Speaker of the House of Representatives, Yakubu Dogara, at the State House in Abuja.

The president also met behind closed-doors with his running mate in the 2011 presidential elections and General Overseer of Later Rain Assembly, Pastor Tunde Bakare, in Abuja.

The meeting with Dogara, which took place inside Mr. Buhari’s office at the State House and lasted about one hour, is the second in less than two weeks between the president and Speaker.

Mr. Dogara, who stands accused by a former Chairman of the House Committee on Appropriation, Abdulmumin Jibrin, of padding the 2016 budget, was accompanied to the Villa by some lawmakers from the National Assembly including Senator Suleiman Nazif (APC/Bauchi North).

The Speaker snubbed all questions from State House correspondents at the end of the meeting.

Meanwhile, the meeting with Pastor Bakare was still ongoing at the time of publishing this report.