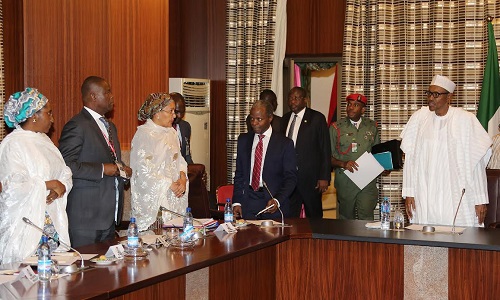 President Muhammadu Buhari on Thursday inaugurated the Governing Council and the Board of Trustees (BoT) of the Trust Fund for the Hydrocarbon Pollution Remediation Project (HYPREP) in Ogoniland.

The inauguration of the council and BoT is ensure total implementation of the United Nations Environment Programme (UNEP) report on Ogoniland.

Speaking during a brief ceremony at the Presidential Villa, Abuja, the president noted that the project, which will take two decades to implement, was commencing five years after the UNEP report was submitted.

The next five years, he said, will address emergency response measures and remediation, while the subsequent years will aim to restore the ecosystems in the Niger Delta.

Buhari, therefore, charged the communities to ensure security for the project and prevent recontamination of Ogoniland when completed.

He said: “Today marks another milestone in the commitment that this administration has made in ensuring the implementation of the UNEP Report on Ogoniland and other impacted sites.

“This is a very important endeavour that has direct impact on the lives and livelihoods of our brothers and sisters whose environments have been severely degraded by years of unchecked pollution from oil exploration activities.

“It is exactly five years today, on the 4th of August 2011, the United Nations Environment Programme (UNEP) submitted an extensive Report on its environmental assessment of Ogoniland. That report, which was commissioned by the administration of former President Olusegun Obasanjo, did not only document the problems that existed, but also contained recommendations on how they can be addressed, both in the short term and in the long term.

“Five years on, the project is yet to properly take off.  It would appear to have experienced a series of false starts, while the local communities continue to suffer from the problem, which has existed long before the Report. This all adds to the picture described in the UNEP Report as ‘a landscape characterized by a lack of trust, paralysis and blame’”.

Thanking the Council and BoT for accepting to serve on the Project, the president said since the flag-off of the project two months ago, considerable effort had been expended to create a robust mechanism for implementing the project in the long term.

According to him, the Governing Council and BoT jointly form an essential part of the governance framework.

“The governance framework we lay today, following extensive consultations, will form the bedrock for sustainability for years to come”, President Buhari added.