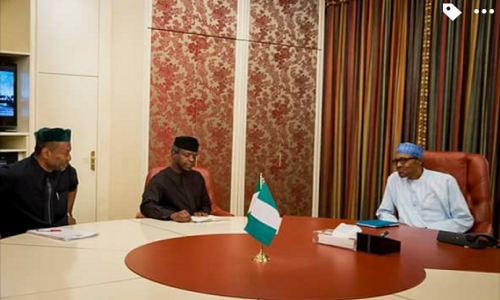 The Economic Management Team (EMT) of the President Muhammadu Buhari administration on Tuesday held what it called a consultative forum with a team of renowned economic and financial experts across the country.

The meeting was aimed at creating a platform for the EMT, comprising strictly of government officials, to interface with experts on how best to tackle the recession in the country.

At the meeting presided over by Chairman of the EMT and Vice-President, Prof. Yemi Osinbajo, SAN, suggestions on how best to reflate the economy, bring it out of recession and promptly restore growth were part of the agenda.

According to a statement by Mr. Osinbajo’s spokesman, Mr. Laolu Akande, the vice-president was said to have at the closed door session, expressed President Buhari’s determination to continuously consider and adopt policies that would boost businesses, increase employment and provide succour to the poor and disadvantaged.

“We will continue to engage with experts and other stakeholders so we can measure the progress of the economic policies that have been put in place.

“The challenges are many but the opportunities are much greater.

“We are clearly on the path to building an economy that will create jobs and ensure inclusive growth”, Osinbajo was quoted as saying at the meeting.

Issues on the top burner at the meeting were said to have included the review of the new foreign exchange regime and its effect on the economy as well as the draft Medium Term Economic Framework for 2017-2019.

According to the statement, the EMT and the experts made suggestions on how to reflate the economy, especially through massive infrastructural spending with active private sector participation, ensure pro-people economic policies, increase the supply of dollars to the forex market among other issues.

Also speaking with reporters at the end of the meeting, Minister for Budget and National Planning, Senator Udo Udoma said, “We have just finished a special meeting of the economic management team, as you know, we are in the middle of consultations to develop the new mid-term economic framework, M-TEF.