Home Sports Chinese Athlete Proposes To His Girlfriend As She Receives Her Medal At...
Facebook
Twitter
WhatsApp 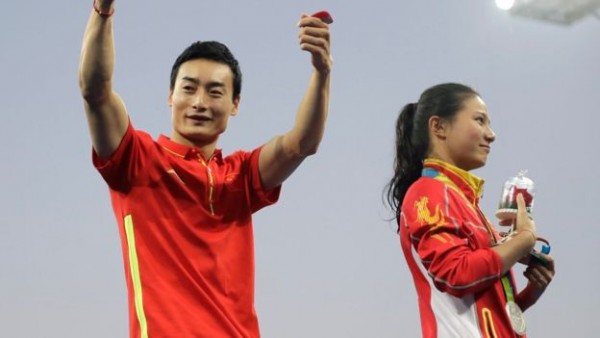 Chinese athlete, He Zi was in for quite a surprise just after winning silver in the women’s three-metre springboard at the Rio 2016 Olympics.

Her boyfriend of six years who is also an athlete and won gold, Qin Kai rushed up with a diamond ring during the medal ceremony and asked her to marry him.

An obviously confused He took a while to go from shock to smiles and she freely admitted it came as a shock; “I didn’t know he would propose today and I didn’t expect myself to marry myself out so early,”

“I saw him during the afternoon and he seemed to be memorising something, so I asked him ‘what are you doing?’ and he said he was singing,” she told reporters.

“I’ve forgotten most of what he’s said (during the proposal), but it’s largely what you can expect like promises, but what touched me the most is that he said he was willing to be bullied by me for life,”

It is the second engagement during the ongoing Olympics after Isadora Cerullo’s girlfriend proposed to her after a rugby match.