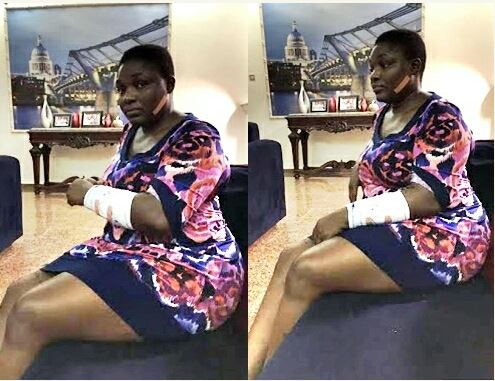 The story of a promising Nollywood movie producer, Chioma Okoye who was recently attacked by a group of women, shook the internet last week. The women claimed to have attacked her for making her life story into a movie and invading her privacy.

Over the weekend, correspondents from IYODATV had a chat with Miss Chioma Okoye to hear her own side of the story as there were different versions circulating the internet. The movie in question is titled ‘Lagos Men’ which centers around a man who was constantly having sexual intercourse with his step daughter.

According to Miss Chioma Okoye, the woman in question who is known as Mrs Oge Ukazia ran to her alongside a mutual friend (of blessed memory) and pleaded with her to help tell her story to the world through a movie because her marriage was a living hell as her husband would not stop having sex with her daughter despite all her pleas and prayers. She agreed to do it but due to technical reasons, it took about 3 years for the movie to be produced and aired online. She further expressed her shock when some women barged into her house, destroyed some of her properties and ganged up to beat her. She sustained some body injuries in the process and had to seek medical attention. As at the time of this interview, miss Chioma is seen to be recovering from the bruises and trauma this attack has caused her and has contacted her lawyer to take legal actions against Mrs Ukazie.

She has since been receiving threatening phone calls from Oge and has left the comfort of her home so as to avoid another violent attack.

Below is a copy of the letter sent by her lawyer to the Nigerian police to ensure that Miss Chioma Okoye gets the justice she truly deserves.