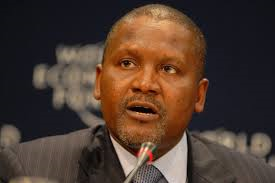 Reports have emerged of Aliko Dangote’s aides being denied visas by the Zimbabwean Immigration Department.

It is said that due to this, the tycoon’s planned US$1 billion worth of investment in the country could be cancelled.

The aides were reported to be sent by the billionaire to expedite progress.

The decision for the denial could be a result of the political situation in Zimbabwe.

Factional fights are said to have emerged within President Robert Mugabe‘s government.

A faction linked to Vice President Emmerson Mnangagwa and another are said to be at war over who will replace the incumbent when he leaves office.

Mnangagwa is said to be vigorously pushing for Dangote’s investment plans.

In terms of the country’s visa regime, Nigeria is under Group C classification, meaning that citizens of that country must obtain visas first before they enter Zimbabwe.

While the Zimbabwe Investment Authority (ZIA) has already issued the requisite permits for the Dangote Group to start work, it is critical that the group deploys its best brains on the ground to monitor the various stages of implementation.

Currently, the group is seized with preliminary activities such as geological surveys for its coal and cement projects.