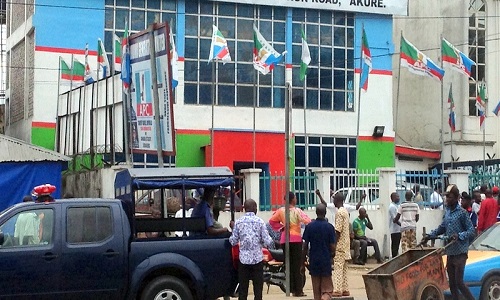 The Deji of Akure, Oba Ogunlade Aladetoyinbo, has condemned in strong terms, the placing of fetish objects at the Secretariat of the All Progressive Congress (APC) in Akure, the Ondo State capital early hours of yesterday.

Some unknown persons had placed the fetish objects, including rituals, cutlasses and palm fronds, at the entrance of the APC secretariat, which has remained under lock and key following an intra-party crisis.

Some of the fetish items were placed at the secretariat gate and some were hanged around the premises.

Although the objects were later removed after “spiritual cleansing” by some party members under the watchful eyes of security operatives, the secretariat was yet to be opened.

Reacting to the “sacrilegious act”, the Deji, in a statement issued by his Chief Press Secretary, Michael Adeyeye on Monday, condemned the attitude of those who sealed the entrance of the party secretariat with palm fronds, which is the traditional means of sealing-off premises in Akureland.

“The sacrilegious act carried out at the Ondo State Secretariat of the All Progressive Congress early this morning is condemned in its totality.

“We want to state that carrying out traditional sealing-off of premises remains the prerogative of the palace.

“The Deji of Akure remains non-partisan and a father to all political aspirants and never authorised such.

“The palace is apolitical and therefore should not be dragged into the internal wrangling of any party”, Mr. Adeyeye said.

According to the statement, Oba Ogunlade frowned at the attitude and wished to inform the general public that such an act did not emanate from the palace as any attempt to desecrate the tradition will be vehemently rebuffed.

The palace spokesman explained that those who carried out the act were not aware of the cultural and traditional implications of the action.

He said that the palace had sent its emissaries to carry out a thorough investigation of the matter and was confident that the culprits would be apprehended in no distant time.

Mr. Adeyeye also called on the APC and security agencies to unravel the circumstances behind the abominable act and bring to book those behind the sacrilegious act so as to serve as deterrent.