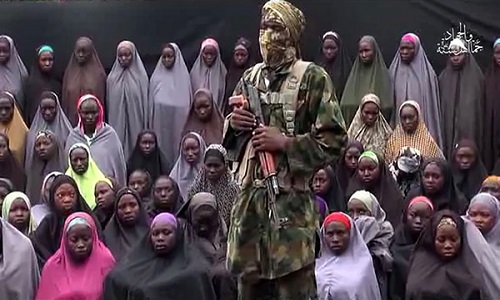 The Defence Headquarters on Sunday said it was examining the latest video from Boko Haram group purporting to show some of the abducted Chibok schoolgirls even as it doubted the terrorist sect’s claims that some of the girls were killed in airstrikes by the Air Force.

In the video, a masked Boko Haram fighter decked in military camouflage with an AK-47 rifle slung across his chest, restated the group’s demands that the federal government release all its members in various detention centers especially in Abuja, Maiduguri and Lagos in exchange for the remaining Chibok schoolgirls.

But the masked Boko Haram fighter, who spoke in Hausa language, claimed in the video that 40 of the girls have been married off (one of the girls was seeing carrying a child in the video, it could not be immediately ascertained if she is indeed one of the Chibok schoolgirls and if the child is hers), others killed by airstrikes and several others injured.

Responding to the latest video of the Chibok schoolgirls, the Acting Director, Defence Information, Rabe Abubakar, said that the military is examining the clip to verify its authenticity. 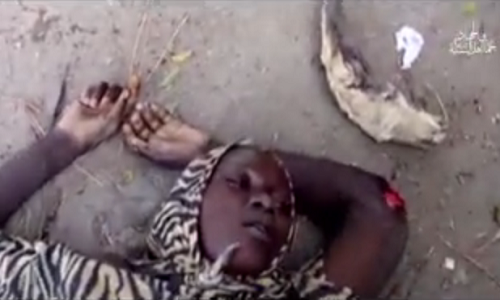 He said: “Currently we are studying the video clips to verify its authenticity and analysing the comments of the speakers in the video especially the terrorist member and the girl that spoke in mother tongue”.

Mr. Rabe, a Brigadier General, also disputed allegations in the video that some of the kidnapped girls were hit by an airstrike.

According to him, “It is extremely difficult and rare to hit innocent people during airstrike because the operation is done through precision attack on identified and registered targets and locations. The Precision Airstrike is very effective at taking out targeted enemies because it is not a random operation. We are nevertheless studying the video clips to examine if the victims died from other causes rather from the allegation of airstrike”.

A top Nigerian Air Force officer, told PRNigeria on the condition of anonymity that the airstrikes are controlled by professionally trained officers who coordinate the strike with friendly ground troops, after a lot of surveillance to limit casualty on the ground.

He stressed that the NAF through its Component in Operation Lafiya Dole was focusing on sustaining air operations and providing air support to ground troops of the Armed Forces’ as they strive to rid Nigeria of the Boko Haram insurgency.

“Nigeria Air Force employs precision guided weapons with modern Intelligence Surveillance Reconnaissance systems to reduce likely collateral damage from any airstrike. All the areas stroke throughout the operation were thoroughly monitored on intelligence surveillance and eye services before the attacks or shelling. Most of the targets areas were clearly identified before the air strikes to avoid collateral damages”, he said.

Meanwhile the Defence Headquarters has promised to issue an update after its investigation.