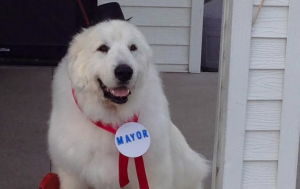 On Saturday, a dog was re-elected as the mayor of a small town in Western Minnesota, USA.

Duke, a 9-year-old Great Pyrenees, was said to be re-elected as mayor of Cormorant.

According to Becky Ulven, a Cormorant resident, “He’s the only dog that’s been elected mayor in America.”

Duke’s proud owner David Rick said, “Three years ago, it happened by accident, it was a write in vote. You pay a dollar and you can vote.”

Duke is now at the end of his second term, and locals say the he has one of the highest approval ratings in the country.

“I don’t know who would run against him, because he’s done such great things for the community,” said another Cormorant resident, Karen Nelson.

Duke was even said to be too busy with last minute campaigning for an interview.

“Everybody voted for Duke, except for one vote for his girlfriend, Lassie,” said Rick.