A Nigerian woman, Dorothy Ngozi has narrated how her newly employed driver made away with her vehicle on his first day of employment.

She shared her story on Facebook and attached an identification card of the driver-Joseph Nwaeke- in a bid to track the driver. The vehicle in question is a Honda Accord 2012 model. 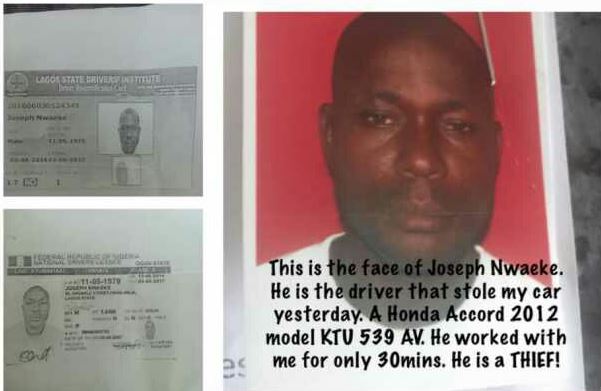 This is the driver ( thief) that stole my car, a Honda Accord 2012 model (KTU 539 AV) yesterday, August 20, 2016. He started work same yesterday, and drove me to work as I had a meeting for 8.00am. We got to my office at about 7.58am and once we drove into the car park, I got down and showed him where to park the car and dashed off as I was already running late for the meeting. At the end of the meeting, I got to the car park at about 2.12pm and my car was not parked there. I tried calling the driver several times, but his phone was switched off. I then went to the security guys at the gate to enquire if they had seen him and they confirmed that he drove out at 8.03am, exactly 5mins after we got to the office. His name is Joseph Nwaeke .