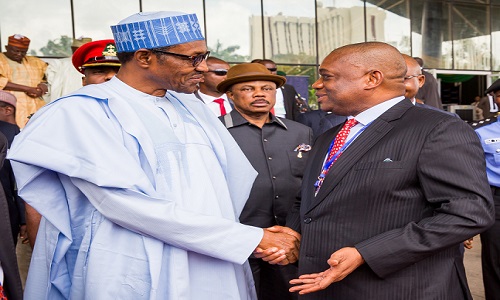 This is just as he expressed confidence in the president’s capabilities to turn around the fortunes of Africa’s largest economy, despite the current challenges.

Mr. Kalu also expressed confidence in Buhari’s proposed agenda for national reformation, saying it would be beneficial to all citizens.

On how to overcome the economic hardship in the land, the eminent businessman described Nigerians as innovators, globalisation-savvy businessmen and women, farmers, manufacturers and politicians, saying they remain determined to succeed in an ever-competitive global marketplace.

According to him: “In fact, Nigerians succeed everywhere, it seems, except at home”.

Though he admitted that the country was grappling with some economic, ethnic, religious and political challenges, the former governor believed there would be light at the end of the tunnel, especially when everyone gives the needed support to the president.

“Yes, we have challenges to overcome; those that are frustratingly inherent in our current public system. We remain reliant on the same specific energy resources that are bountiful in some regions and scarce in others, creating an imbalance that perpetuates regional, ethnic, religious and political tensions”.