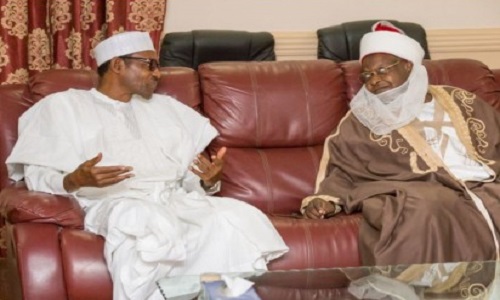 The Emir of Katsina, Abdul-Mummuni Kabir, has urged Nigerians to stop castigating President Muhammad Buhari over the economic challenges facing the country.

Mr. Kabir made the call during the inauguration of a book on family lineage of late chief Imam of Kano residing in Katsina, Muhammad Zaharaddeen, on Saturday in Katsina.

“It has come to our knowledge that some disgruntled people are castigating President Buhari and blaming the economic problems of the country on him.

“The president cannot solve the economic blunder committed in 16 years within one year.

“President Buhari needs some time to marshal plans that will solve the several challenges facing the country”, he said

Mr. Kabir advised Nigerians to rally round and support Mr. Buhari to enable him to discharge his duties for the betterment of the people.

“The president needs the support and prayers of his brothers and sisters from the North to overcome the several problems facing the North and the country”.

The emir commended the author of the book for writing the book on his family lineage that migrated to Katsina in 1894 during Hausa/Fulani civil wars.

He said the book will serve as a reference material for history students in tertiary institutions in the state.

Mr. Masari said the family had some prominent politicians like Secretary to the Government of Katsina State, Mustapha Inuwa, and Hadi Sirike, a serving minister in Buhari’s Administration.

NAN reports that the Emir of Kano, Muhammad Sanusi, who was the chief launcher of the book, donated N1 million.

Over N5 million was realized at the launch.