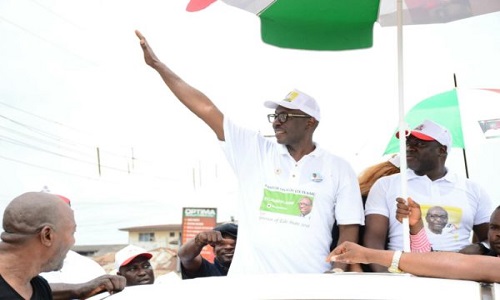 Traditional ruler of Uromi in Esan North East Local Government, His Royal Highness, Anslem Okojie, Onojie of Uromi, has exposed how leaders of the Peoples Democratic Party, PDP, and its candidate in Edo State, Pastor Osagie Ize-Iyamu, brought N6million cash to bribe traditional rulers in Edo Central ahead of the September 10 governorship poll in the state.

The monarch, who said the PDP and its candidate pleaded with him to keep the bribe secret, declared that he does not trust Ize-Iyamu enough to be governor of Edo State.

Top chieftains of the PDP including former Chairman of the party’s Board of Trustees, Chief Tony Anenih, hail from Uromi.

The Onojie of Uromi said the PDP has made many unfulfilled promises in Esan Land and therefore could not claim to be in-charge of the land.

He spoke Thursday when the candidate of the All Progressives Congress (APC), Mr. Godwin Obaseki and his running mate, Hon Philip Shaibu, visited his palace to seek royal blessings and support.

HRH Okojie said politics “is not about sentiment but development”, stressing that he is in charge of the political affairs of Uromi people.

He also declared that he does not owe any political leader any explanation about affairs of his kingdom.

The Monarch, who said he was impressed by the performance of Governor Adams Oshiomhole, noted that he was in the governor’s entourage to inaugurate three road projects in Uromi and a town hall, which were part of the promises made by the Oshiomhole administration.

He stated that reports by the PDP that Uromi belongs to them were untrue, and frowned at what he termed desperation of Pastor Ize-Iyamu to become governor.

Exposing how the PDP leaders brought N6million for the traditional rulers in Edo Central, HRH Okojie said “I do not trust Pastor Ize Iyamu enough to become a Governor. My People want Godwin Obaseki. I have been on this throne for twenty-five years and I am ready to say the truth always. Ize-Iyamu spoke to me and said he wanted to meet with traditional rulers in Esanland. When he came to my Palace; we were 29 in number and he gave us N3 million.

“We have what we call a caucus in Esanland and I am the chairman of the caucus. Out of the N3 million, we declared N2.5million and N500,000 was for members of the caucus. That is past. Again PDP said they will come to flag off in Uromi, I said, yes no problem. Before that time Onojie of Ewu called me to say PDP is bringing N3 million for us that it will not be enough. Also, the Onojie of Opoji called me to say the N3 million will not be enough and I ask what should we do?

“He said, we should tell the pastor to make it N10 million or we would tell the Comrade Governor to give us N10 million. Now I called Ize-Iyamu to say I heard you are bringing N3 million for traditional rulers in Esan land, that is small, you have to do something better than that because when you were coming before the primaries you brought N3 million now you are a candidate, you can’t bring N3 million, you have to do something better.

“So when they came, Chief Anenih brought N3 million, Ize-Iyamu brought N3 million making it N6 million that was what was brought to me in this palace. They have been begging me not to play the tape to you but I said I will let you know about this because you are my friend and a good man who has done so much for Uromi people.

“Nobody controls me even Chief Tony Anenih doesn’t control me, I tell him what to do because I am the owner of Uromi kingdom”.

Meanwhile, Obaseki assured the Monarch and people of Uromi that he will build upon the good legacies of the outgoing governor, Mr. Oshiomhole.

He described Uromi as the powerhouse of the economic life of Esan Land and promised to develop the area and deal with human capital development.

“As a government, we shall be accountable to the people and continue with the developmental strides of the incumbent governor of Edo State. We are familiar with the Challenges and we will deal with them”, the APC candidate pledged.