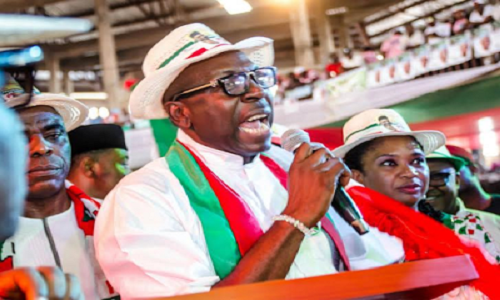 Some Igbo unions in Edo State have dismissed claims by the state chapter of the People’s Democratic Party (PDP) that its candidate, Pastor Osagie Ize-Iyamu, has been adopted by all Igbos in the state as their preferred candidate in the September 10 governorship election.

The unions instead said they were throwing their weight behind the All Progressive Grand Alliance (APGA) and its candidate, Osaro Onaiwu, who they expressed optimism will cut taxes and make life meaningful for them.

Spokesman of the group, Ambrose Aniele, made the statement in a chat with reporters in Benin City, the state capital on Tuesday.

Ambrose said Igbos in the state have no business with the PDP and have never endorsed Pastor Ize-Iyamu.

He said the PDP did nothing when they were in power in the state.

He said. “As I speak to you we are campaigning for APGA. Instead of supporting PDP we will support APC because whether you like it or not Benin is beautiful today because of Oshiomhole and APC.

“I am aware that some of our people have met with APC candidate Godwin Obaseki and Oshiomhole but I can tell you that majority of us will vote for APGA because it is the party for the Igbos. The only problem APC has is the taxation problem.

“Oshiomhole has worked to be honest. You cannot compare PDP with APC, the PDP people have big men who share the money, they don’t care about we Igbos so why will we vote for them?

“We are calling all our people to come our next week Saturday and vote for Osaro Onaiwu who is the APGA governorship candidate. He will help us cut taxation and make life better for everybody living in Edo state”, Aniele stated.