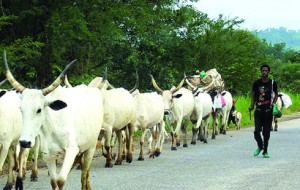 A bill to ban free grazing in Ekiti state was passed on Thursday by the Ekiti State House of Assembly.

The passage of the bill followed the submission of a report of Joint Committees on Agriculture and Environment by its Chairman, Mr Ayodele Fajemilehin, to the House.

The Speaker of the House, Mr Kola Oluwawole, who presided over the plenary, said the bill would now reduce the incessant clashes between farmers and herdsmen in the state.

If the bill is eventually accented to by the governor, it will now become a crime for any cattle, sheep and goat to graze on undesignated land for ranches in Ekiti.

The bill also prescribed six months imprisonment without an option of fine for any offender of the bill that also ban movement of cattle after 6pm in the state.

According to the new bill tagged,” Prohibition of Cattle and Other Ruminants Grazing in Ekiti, 2016″, anyone found violating the bill upon conviction shall be sentenced to six months in prison without the option of fine.

Others included, “The Governor shall by an order designates land in each of 16 Local Government Areas in the state in respect of which Cattle or Ruminants may be permitted to graze.

The rest are,” No person shall cause or permit any cow, oxen, sheep as well as goat under his or her control to graze on any land in which the Governor has not designated as ranches” among others.

“No cattle or other ruminants shall by any means move in the night, movement shall be between 7 a.m and 6p.m”