Home News Feed Eze Obidiegwu Onyensoh: I Died, Was Buried For Days Before I Was...
Facebook
Twitter
WhatsApp 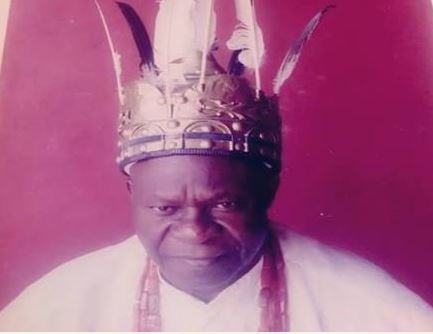 The traditional ruler of Nri Kingdom, Anambra State, His Majesty, Eze Obidiegwu Onyensoh (Nri Enwelana) has given insight into his kingdom and shared some rather shocking norms and traditions behind ascending the throne.

Onyensoh, who is the 26th Eze Nri in the kingdom, said he ‘symbolically’ died and was buried for three days before he was crowned king, adding that the method of ascending the throne is not by election, but by divinity.

In an interview with the Punch, His Majesty, on how he ascended the throne, said “In this kingdom, for you to be an Eze Nri, you also have to die. The candidate for the Eze Nri must die symbolically, and after three days, the person will wake up. During the person’s death, he takes a new body and when he wakes up, he must shine like a star.

“What I am telling you may sound like exaggeration but I tell you, it is the truth! The candidate must die! When the candidate dies, he will be buried in a shallow grave for three days; his body will be buried, but his head will be left outside the grave. During that period, he will undergo a transformation; pass through a stage, from human being to spirit, after which he will wake up and his body will be adorned with white chalk (Nzu) and he will shine like a star. From there, he will leave his father’s compound.

“He will not leave through the door. It is presumed that he has grown above passing through the door. They had to put a ladder for me to climb over the fence and I landed outside and I left my father’s compound. This happened like 28 years ago.

“While you are in the grave, you are being mourned by your family and the entire village will be in festive mood, eating and dancing every day. After that traditional mourning, when you wake up again, you take a new body and you are now a spirit. So when you have taken a new body, you go to a confluence river. The nearest to our community is the Ezu River, which is in Aguleri. At that confluence, they employ divers, who go down deep into the sea to scoop clay, which would be used to mould a pot. The Eze will drink from it and we call that pot, Udueze.

“After the Eze has drank from it, the pot would be seen as a very precious pot because the clay used in moulding it was got from the depth of the sea, from a confluence of two rivers. When the divers go in there, they would want to test your agility and spirituality as an Eze. If the diver does not come out, well, that is it! But if the diver comes out with the clay that would be used in moulding the pot, then you are Eze (king).

“Around our place here, we have two confluence rivers where an Eze Nri could be taken. There is Lokoja and there is Aguleri. Since Lokoja is far from us, we have to go to Aguleri, that is Ezu na Omambala, Abanaba.

”From there, you will visit all communities that are descendants of the Nri Kingdom and then you go home triumphantly as a king. Then you embark on another visit to Umueri clan, which contains 118 settlements. You have to visit as many as you can, and they will know that a new Eze Nri has emerged. After then, the clans will now return the visit to Eze Nri, where the Eze Nri will settle in his Obi (domain) and receive them. During that period, the Eze Nri will stay in a hut that is akin to half room, and will return to the spirit world for eight days, before he will now become a human being again.

“While he is in that spiritual state, he does not receive visitors because he is still a spirit. But after the two market weeks of eight days, he could receive visitors.

But before then, no one sees him, he is served food from underneath the door; no one is permitted to see him physically. When he leaves the Obi after eight days, he moves to his palace, which at that time, must not be a zinc building but would be built by a certain leaf, called Uma, which is usually broad. That is where he would stay for two years before his palace would be changed.

“Also, we have a kind of system that when a traditional ruler passes on, we have to stay seven years without a king. Those seven years will give the people time to know which person would occupy the throne. They would look for signs and signals.

“One section of the community produces, and then another does. There are three villages here. So the lot fell on my village to produce the traditional ruler and my village needed someone who would occupy the seat. In 1987, while I was in Port Harcourt, my people invited me home and I came, only to be told that the position of Eze Nri had shifted, and that I was likely going to be the person to occupy the throne. Our method to determine who would become the king is not through election; it is divine.

“We would have to perform what we call ‘Afa’ (divination). The gods would have to say who it would be. Whoever the gods appoint for that position cannot refuse it. The gods were consulted and the lot fell on me. I could not believe it. I was like, ‘how can a poor man be the traditional ruler?’ I was a young man and I had nothing. I had just returned from the US and was looking for a way to earn a living. Let me also say that before you become a candidate for Eze, you must have taken all the titles.

“I had not taken any title then, so I had to start taking all the titles one after the other. I finalised it by taking the Ozo title. When that ended, I took a higher one – the Oba title. The long and short of it is that there are so many titles one has to take to become Eze Nri. You have to visit all the shrines in this community and all the ancestral homes. We are the descendants of Eri.

All the Eri communities and all the shrines in the communities had to be alerted of the emergence of a new Eze Nri. It took us about three years to take all the titles,” Onyensoh added.