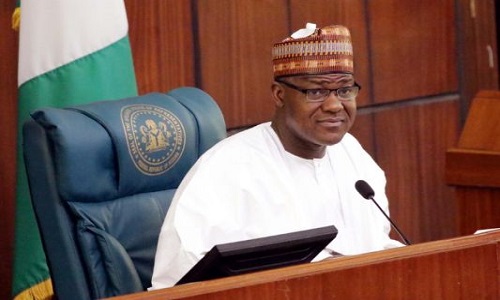 A Senior Advocate of Nigeria, SAN, and human rights activist, Femi Falana, has led a cross-section of prominent groups and individuals that have given Speaker of the House of Representatives, Yakubu Dogara, knocks for claiming that budget padding is not an offence under any law.

In separate interviews on Friday, they said that Dogara’s statement showed that he was not sensitive to the suffering of Nigerians.

It would be recalled that the Speaker, after a closed-door meeting with President Muhammadu Buhari on Friday at the State House, Abuja, said that he would not resign over the budget padding allegation levelled against him and 12 others by the ousted Chairman of the House Committee on Appropriation, Abdulmumin Jibrin.

He also claimed that budget padding was not an offence under the law.

“What is padding? You haven’t told me, ask Jibrin what is padding. For me, I studied law and I have been in the legislature all this period, I have never heard of the word ‘padding’ being an offence under any law”, Mr. Dogara was quoted as telling State House correspondents after the meeting with the president, which lasted for 30 minutes.

First to react to the statement by the Speaker in an interview with Vanguard published on Saturday, Mr. Falana insisted that the alleged padding of the Federal Government’s budget by some members of the National Assembly constituted a criminal offence.

He explained that the offence of padding the budget was not a “once-and-for-all” like murder.

He pointed out that it (padding) started as conspiracy while planning it and concluded when it was used to draw money fraudulently after the budget had been passed.

Falana had also said that it was logical for those implicated in the scandal to step down because Jibrin had done the same.

“What the National Assembly can do after the budget is laid before it is to reduce the amount if it is convinced it is inflated.

“So it is conspiracy when they increase the amount or insert projects into the budget. The criminal act is concluded when they now draw from the funds they have inserted”.

Speaking in the same vein, the spokesman of Afenifere, Yinka Odumakin said, “Budget padding is intent to commit an offence no doubt but the speaker should shelve impunity by showing some remorse”.

Mr. Odumakin continued: “He should appreciate the level of angst in the society. If people have not been paid for several months and cannot afford to eat, you can’t be telling them that ‘padding’ with billions of naira is not an offence”.

Also, the President of Campaign for Democracy, Abdul Usman, said that budget padding without following due process, was illegal, calling on the Speaker to resign.

Usman stated, “Dogara should resign for this illegal inclusion of projects that doesn’t exist in his constituency in the 2016 budget, as alleged by his colleague”.

The CD leader also called on security and anti-graft agencies to investigate those involved in the illegal action.

The President of Committee for the Defence of Human Rights, Malachy Ugwummadu, said if Mr. Dogara was not disposed to stepping down, then the least expected of him was “to remain extremely circumspect without the air of dismissive arrogance and impunity”.

According to Ugwummadu, “The extraneous technical response sought to be communicated to the public that ‘padding’ is unknown to our criminal jurisprudence is reminiscent of President Jonathan’s failed attempt to draw a non-existing distinction between stealing and corruption which is very provocative and completely unacceptable to the people of Nigeria, who are the direct victims of the financial recklessness of the state actors including the Speaker”.

Spokesperson for the Ijaw Youth Council, Mr. Eric Omare, called on the Speaker to stop justifying an action, which he said was tantamount to corruption.

Omare described budget padding as one of the reasons why many government agencies have been underperforming, adding that “any action that is immoral in the course of governance is corruption”.

He said, “In this case, some parts of the country got more than some others. So because Dogara is the Speaker, he put more than N4bn contract in his constituency alone whereas some constituencies did not get any. In my view, that is corruption.

“And not only that, in some cases, as alleged by Jibrin, they tampered with budgets of some agencies and ministries such as the Niger Delta Development Commission and the Ministry of Niger Delta. It is immoral and condemnable; he should not try to justify it and what he did is one of the reasons why a lot of government agencies are not performing because the budget process has been distorted”.