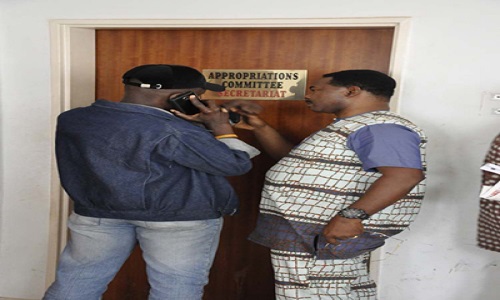 Human rights activist and Senior Advocate of Nigeria, SAN, Femi Falana, on Sunday gave the Department of State Services (DSS) knocks for wading into the unfolding budget padding scandal that has rocked the House of Representatives for more than a week.

In a statement Sunday, Mr. Falana said the DSS’ mandate was strictly limited to protecting the country against internal security threats, adding that the agency acted ultra vires by launching criminal investigations into the alleged budget padding scandal.

“Having regard to the recent activities of the SSS and the clear provisions of the relevant laws on investigation of corruption and other economic and financial crimes the SSS lacks the moral right and legal powers to interfere in the investigation of the criminal allegation of padding of the budget in any manner whatsoever” the senior lawyer asserted.

The DSS had reportedly placed the secretariat of the House Appropriation Committee under lock and key following a petition to it that the Speaker of the House, Yakubu Dogara, was planning to break-in and cart away evidence that could be used against him.

The sacked chairman of the committee, Abdulmumin Jibrin (APC/Kiru-Bebeji federal constituency) had in a series of mind-boggling allegations since his removal last Wednesday, accused the Speaker, his deputy, Yusuf Lasun; Chief Whip, Alhassan Ado Doguwa and Minority Leader, Leo Ogor, among others, of padding the 2016 budget.

But in his statement Sunday, Mr. Falana said Nigeria’s own secret police was far from being the appropriate agency to investigate the matter, saying any action its operatives take on the matter would be nullified by the court.

“More importantly, by virtue of the provisions of the National Security Agencies Act the powers of the SSS are strictly limited to the ‘preservation and detection within Nigeria of any crime against the internal security of Nigeria’.

“Since the padding of the national budget is a straightforward case of economic crime which is not concerned with the internal security of the nation the SSS should not play into the soiled hands of the criminal suspects in the House of Representatives as they may later turn round to challenge the legal validity of any criminal charge arising from a faulty investigation report”, the legal luminary argued.

“The SSS should be called to order as the nation cannot afford to bungle the investigation of the highly placed politically exposed persons involved in the padding of the budget”.

Mr. Falana also called on the Nigerian government to allow appropriate law enforcement agencies to continue with the case without the DSS, saying only this option would withstand the test of the law.

“In the light of the foregoing, the Police and the anti-graft agencies should be allowed to get to the root of the criminality of budget padding in the national assembly. To facilitate and accelerate the investigation the President of the Senate and the Speaker of the House of Representatives should be compelled to set out the details of the budget of the national assembly.

“However, it ought to be pointed out that the investigation would not be complete if it is not extended to cover the allegation criminal diversion of over N300 billion via constituency projects purportedly executed by past and serving federal legislators. However, to carry out a thorough investigation the President of the Senate and the Speaker of the House of Representatives should be made to give details of the 2016 budget of the national assembly.

“At the end of the investigation all the suspects who are indicted should be charged to court while the funds allegedly stolen by them should be recovered. In addition, the top civil servants who colluded with the legislators to alter the 2016 national budget should be handed over to the Police and anti-graft agencies for investigation and prosecution. This is the time to stop the looting of the treasury through the padding of the budget by civil servants, ministers and legislators”.