A family of three, yesterday, narrowly escaped death after a neighbour spiced their pot of soup with insecticide in Lagos. 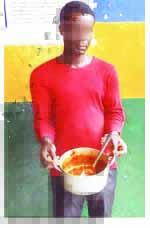 Daily Sun reports that a woman, who was cooking soup in Baale Aiyetoro Street, Ajegunle area of Apapa and had gone to buy salt, but when she returned, she discovered that the soup aroma had changed to offensive odour of insecticide, otherwise known as otapiapia.

The woman who was suspicious quickly notified her landlady.
The landlady was said to have arrested the only co-tenant on the premises and took him to the traditional ruler of the area, who handed him over to the police.

It was gathered that the suspect, Gordon Daniel, during interrogation, confessed to the crime.

The case has been transferred to the state Criminal Investigation Department (SCID) Panti, Lagos.