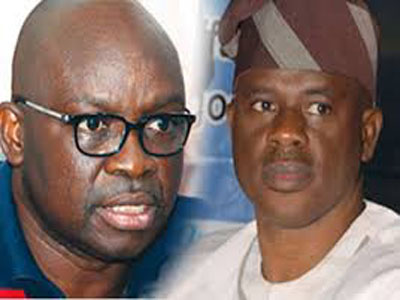 More troubles came the way of embattled Governor of Ekiti State, Mr. Ayodele Fayose as the Economic and Financial Crimes Commission (EFCC) uncovered another $5million (N1.040billion) cash allegedly given to him by former Minister of State for Defence, Senator Musiliu Obanikoro.

The cash is part of the N4.7billion slush funds traced to Obanikoro’s company, Sylva McNamara.

Out of the $5 million, investigations by the EFCC showed that the Ekiti governor allegedly gave his associate, Abiodun Agbele, over $1million as part-payment for the acquisition of four chalets in Lagos.

The shady deal was exposed when Agbele took the money to a Bureau De Change (BDC) operator, Ahmed Uba, who transferred the cash to Still Earth as part-payment for the properties.

Also, the Ekiti State Commissioner for Justice and Attorney-General, Kolapo Kolade, has been grilled by the anti-graft agency.

SEE ALSO: I Was Placed Under House Arrest In Port Harcourt, Says Fayose

The commissioner may face EFCC interrogators on August 30.

According to a top source in the EFCC, the ongoing investigation of Fayose for allegedly receiving N1.219billion from Obanikoro, also revealed that he got another $5m cash (N1.040billion) from the ex-minister.

“Our investigation so far has shown that out of the $5m Fayose gave Agbele $1million which Agbele gave to a BDC operator who transferred the money to Still Earth as part-payment for the properties bought.

“Going through the accounts of Fayose, you could see a lot of transactions. Kolapo Kolade, now a commissioner in Fayose’s cabinet was the one who arranged the agreement between Still Earth and J.J. Technical.

“We have interrogated the owner of the BDC Jamil Uba, who told us how he asked his staff to attend to Agbele. Jamil said ‘I instructed Abba Ahmed Uba to transfer the money into Still Earth accounts because Abba Ahmed Uba was working under me that day when Agbele sold $1million at the rate of N208, which is equivalent of N208million”.