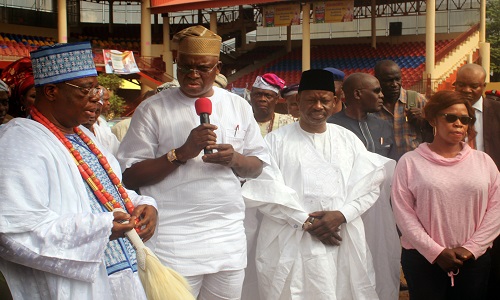 Governor Ibrahim Dankwambo of Gombe State has described his Ekiti State counterpart, Ayodele Fayose, as the symbol of their party, the Peoples Democratic Party (PDP).

The Gombe governor made this known in Ado-Ekiti while laying the foundation of a new hall in the palace of the Ewi of Ado-Ekiti, Oba Rufus Adejugbe Aladesanmi III.

According to a statement on Thursday by the Chief Press Secretary to Ekiti State Governor, Idowu Adelusi, Mr. Dankwambo expressed satisfaction with the developmental projects and programmes executed by the Fayose administration.

“We are all behind Fayose, he is not alone‎. He is a symbol of our party. I am a member of the Peoples Democratic Party and I will continue to be one. He is a great man and he means well for his people. I don’t just follow people. I am a man of my own who rose to the top of his career. I was the Accountant-General of the Federation for six years and whatever I say about anybody, I mean it. Please support Fayose to take Ekiti State to higher level.

“Ekiti and Gombe have things in common. The two states were among the six states created about 20 years ago. What I saw during the Udiroko Festival really impressed me and by next edition, God willing, I will come with more people from Gombe to celebrate with you people. I will also adequately support this hall project and hope to be here when it is inaugurated”, he said.

In his remarks, Governor Fayose said sons and daughters of Ado-Ekiti as well as friends of the town would help in building the hall, stressing that the project is not being executed by the state neither will it be funded by the state.

The governor said the sons and daughters of Ado Ekiti and as well friends of Ewi have resolved to fund the project.

He, therefore, challenged all well-wishers of Ado-Ekiti to rise up and support the project, saying whatever anybody would do, was for posterity.

On the Udiroko Festival, the governor said subsequent editions should be planned in such a way that people could come days before the grand finale and still enjoy the celebrations.