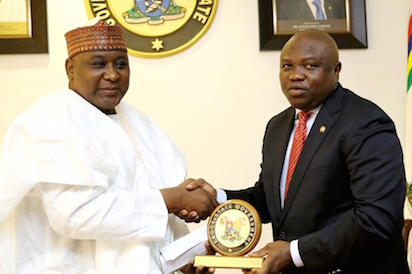 The Federal Government, yesterday, announced the approval of four of the five Aje Oil wells, discovered in Lagos State and disclosed plans to commence disbursement of 13 per cent derivation fund to the state as an oil producing entity.

Chairman, Indices and Disbursement Committee of the Revenue Mobilisation Allocation and Fiscal Commission, RMAFC, Alhaji Aliyu Mohammed, disclosed this during a courtesy visit to Governor Akinwunmi Ambode in Alausa, Ikeja.

The visit of RMFAC was sequel to a letter sent by Governor Ambode to President Muhammadu Buhari a few months ago, seeking the inclusion of Lagos on the list of oil producing states to qualify it for payment of 13 per cent derivation fund.

Mohammed noted that the request of the governor prompted the set-up of an Inter-Agency Technical Committee, comprising RMAFC, DPR, Office of the Surveyor-General of the Federation and the National Boundary Commission, to determine the location of Aje Oil Wells.

He explained that the committee’s visit to Lagos was aimed at verifying crude oil and gas production from Aje Oil Wells for the purpose of disbursement of the 13 per cent derivation fund to the state, in line with the constitution of the Federal Republic of Nigeria.

“Aje Oil wells 1, 2, 4 and 5 fall within the 200 miles Isobath-a line on a map that connects all points that have same depth below water surface, and, therefore, should be attributed to Lagos State. But Aje 3 cannot be claimed by the state,” he said.

Explaining the reason Lagos lost the oil well, Mohammed said due to “the purpose of derivation as spelled out under section 162 (2) of the 1999 constitution and the provisions in Allocation of Revenue (Abolition of Dichotomy in the application of derivation) Act 2004, Aje 3 oil well falls beyond the 200 miles isobaths and, therefore, cannot be legitimately attributed to Lagos State.”

Consequently, he said the commission and members of the Inter-Agency Committee had to embark on the working visit to the oil wells to conclude the process, adding that the visit would promote national unity as well as the socio-economic development of Lagos State and Nigeria.

Mohammed said: “It is also important to state that the commencement of oil production from Aje oil field by Yinka Folawiyo Petroleum Company Limited is the first time oil is being produced outside the Niger Delta basin and, therefore, of a significance in diversifying the source of crude and gas production in the country.”

In his response, Governor Ambode noted that it was significant for the Nigerian economy that Lagos emerged as the first oil producing state outside the Niger Delta basin.

The governor described the visit as the final hurdle left for the state to join the league of oil producing states in the country.

“We are very glad to receive this delegation. We also want to thank the Federal Government, especially President Buhari, for making this to happen very promptly.

“Within a span of about 60 days we wrote our letter, and even before we wrote the letter, this technical committee was set up. It gladdens me to say that the institution works and is working for the good of Nigeria,” he said.

While alluding to the fact that the feat in Lagos had kick-started the path to diversification of oil production in Nigeria, Governor Ambode urged other states in the federation to begin to activate the mineral deposits in their domain to boost their Internally Generated Revenue, IGR.

He said: “It would also give us revenue independence in a manner that there would be equal growth among states.” It will be recalled that Lagos State became enlisted as an oil-producing state in the country, after the Aje field, located in Oil Mining Lease 113, had achieved its first oil.

The milestone came after several missed targets for the achievement of first oil, the latest being March this year. Yinka Folawiyo Petroleum Company Limited, a wholly-owned indigenous firm and operator of the OML 113 offshore Lagos, had announced the commencement of production of crude oil from the field.