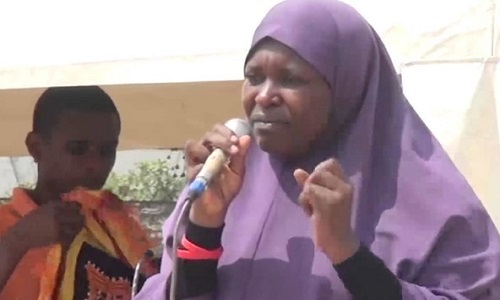 A prominent member of the Bring Back Our Girls (BBOG) advocacy group, Aisha Yesufu, has given the federal government 48hours to reinstate the 2,000 dismissed Nigeria Immigration Service (NIS) recruits or face their wrath.

The activist gave this warning while speaking at the office of the Secretary to the Government of the Federation in Abuja on Tuesday after a protest by the recruits, who are not pleased with the conditions outlined by the Service for their re-engagement.

“Instead of doing the right thing to reabsorb them as mandated by the House of Representatives in their resolution of 12th April 2016, only yesterday the 15th of August 2016, new stringent and needless criteria purportedly approved by the Nigeria Immigration Service; and the Civil Defence, Fire Service, Immigration, and Prisons Service Board (CDFSIP), for reabsorption of #NigeriaImmigration2000 appeared in the national dailies”, she said.

The NIS had said it would use the CDFSIP “Age on Rank” policy, run drug tests, give security clearance and verify the recruits’ certificates before being considered for re-absorption into the Service.

Mrs Yesufu, however, faulted these conditions, saying “These young men and women are not applicants for enrolment into NIS. They are the best 2,000 recruited from among over 1 million applicants following laid down procedures which included open publications in the media for interested applicants. Where in the world are people issued employment letters referred to as applicants?”

“This screening for re-absorption therefore, cannot be regarded as their entry point as applicants, or an exercise for revalidating applicants. A person who has received training, has been documented, issued a service number, and so on is no longer an applicant but an employee/recruit of the NIS. It is even worse to claim that their letters of employment were irregularly issued”.

She argued that the “Age on Rank” policy listed as one of the conditions for re-absorption was made in 2016, months after the recruitment, documentation, and training of 2000 recruited in 2015, stressing that it would be unjust to use such a parameter to screen them.

“We, therefore, urge you to immediately mandate the Ministry of Interior; the Civil Defence, Fire service, Immigration Service, and Prisons Service Board; and the Nigeria Immigration Service to: Issue an official  circular, on proper NIS letterhead reinstating  with immediate effect, each and every member of the #NigeriaImmigration2000 without referring to or regarding them as ‘applicants’, without claiming that their letters of employment were ‘irregularly issued’, and without the retroactive  ‘Age on Rank’ screening.

“Pay up all their arrears of salary and other incentives from May 2015 to date and ensure that such injustice is never again repeated.

“However, may it be abundantly clear that if this matter is not resolved conclusively within the next 48 hours, we shall be left with no other option than to march in our numbers to engage with the President of the Federal Republic of Nigeria himself come Friday 19th August 2016”, the activist asserted.

Responding, the representative of the SGF, who introduced himself as Mallam Ibrahim Hassan, the SSA to the President on Policy and Strategy, assured that nobody will be left out from the 2,000 personnel, adding that the screening is not a new one but for verification.