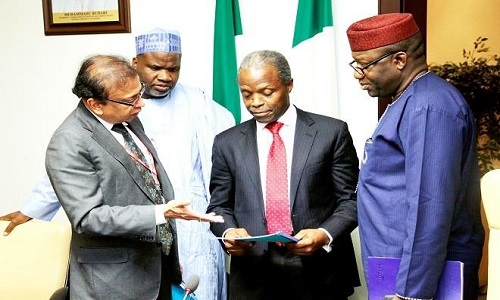 The Federal Government’s plan to revive the steel sector received a massive boost on Monday with the signing of a renegotiation concession agreement with Global Steel Holdings Limited for the Nigerian Iron Ore Mining Company (NIOMCO), Itakpe.

With the renegotiated agreement, the Ajaokuta Steel Complex has also been reverted to the Federal Government, effectively releasing the entity from all contractual bottlenecks that had left it uncompleted and non-functional for decades, while GSHL retains NIOMCO.

The new agreement, which came after four years of mediation, was signed at a short ceremony presided by the Vice President, Prof. Yemi Osinbajo (SAN), in his office at the Presidential villa on Monday.

Speaking at the event, Prof. Osinbajo hailed the mediation process that led to the resolution of the problem that has made it impossible for the two national assets to be functional for years.

He added that it was important the concession works “so that Ajaokuta can take off too”.

Fayemi, who led the Federal Government side in the mediation process, said with the new agreement on NIOMCO, the next step is to commence the process of taking over Ajaokuta and ensuring that it is given out to a serious operator with proven technical and financial capacity. 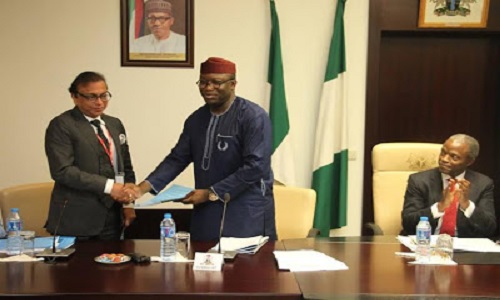 Fayemi said: “It is our expectation that we would accomplish two things – bring NIOMCO to full function and start the process of retaking Ajaokuta and then give it to a new operator.

“With this, we will move from being just a mineral nation to a mining nation.

“Once the first phase of the agreement is accomplished, it is the intention of the FGN to quickly move into accomplishing the objectives of concessioning the Ajaokuta Steel Plant to the most competent operator who meets the requirements of credible track record, technical capacity and financial competence”.

The minister described the settlement as a landmark development that would help the diversification plans of the President Muhammadu Buhari administration.

In his remarks, the GSHL Chairman, Mr Mittal, said the company waited for eight years to achieve this amicable settlement.

Mittal pledged the commitment of his company to the objectives of the agreement and guaranteed supply to Ajaokuta plant and Delta Steel Company, after which it will sell what is left to other interested parties.

He assured the government of its readiness to commence operation soon, adding that in the next two years Nigeria would begin to produce steel.