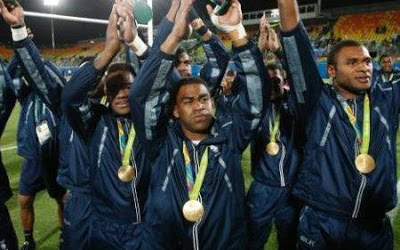 Wild celebrations erupted across the island nation as drivers leapt out of their cars and people took to the streets to wave the national flag, phone carriers offered free calls.  Fiji Airways, the national carrier, announced the only beer it will serve on today will be Fiji Gold, a popular local beverage; and the government declared August 22 a national holiday to mark the win.
According to The Fiji Times , staff at the main hospital reported that “patients used their crutches or wheelchairs to get to the television to ensure they do not miss history in the making”.
Present Prime Minister and former coup leader, Frank Bainimarama thanked the Olympic officials for including the sport in the competition for the first time.

“We can showcase little country like us who don’t have the financial backing like the other countries have, but we managed to beat them,” he said. It’s a wonderful feeling to be Fijian right now wherever you are in the world, especially those back home.” 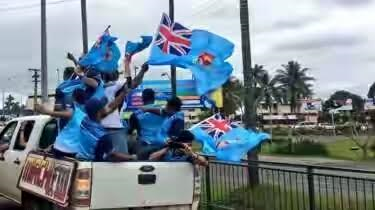 Shops and schools in the nation of 900000 closed as citizens stayed glued to their televisions as the historic final unfolded.
Other Pacific nations say they too will celebrate the “magnificent and emphatic victory by a Pacific nation on the world stage”.

“Pacific Island nations may have the smallest teams competing in Rio, but Fiji has today proven they are mighty,” said Colin Tukuitonga, director-general of the Pacific.