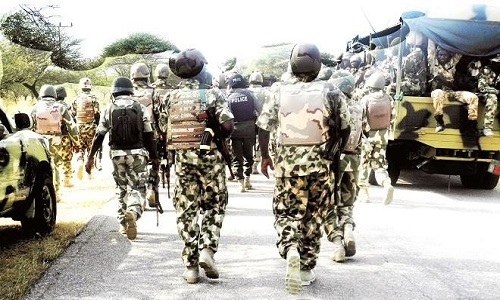 At least five persons were killed and two others seriously injured when soldiers and residents of Kpaidna village in Bosso local government area of Niger State, clashed on Thursday.

The two injured persons were alleged to be army personnel while the identities of the deceased were yet to be ascertained as at the time of publishing this report.

It was learnt that the incident occurred at about 1.30a.m when a combined team of soldiers and Nigerian Air Force personnel, who were in the village on an official operation, were mistaken for armed Fulani herdsmen.

Armed Fulani herdsmen have been blamed for a spate of mass killings in some villages and communities in recent months, with some communities, which have had skirmishes with the herdsmen, resorting to arming themselves against impending attacks from the invaders.

The Assistant Director, Army Public Relations, Major Njideka Agwu, disclosed that the military team was in the village because intelligence reports claimed that some arms and ammunition were hidden in some houses in the community.

It was gathered that as soon as the military team entered the villages, the villagers, who were forewarned of Fulani herdsmen invasion, attacked the team, a situation that resulted in the death of the five people and injury to the two others.

Four of the vehicles belonging to the army were also reportedly burnt by the villagers in anger.

Major Agwu confirmed the story adding that the number of casualties is yet unknown.

“We heard there were arms and ammunition in that village and we went for cordon and search after soldiers were briefed yesterday. Unfortunately, villagers opened fire on us and we don’t know the number of casualty for now because the information is sketchy, but an investigation is still on”, he said.

The Niger State Police Public Relations Officer, Bala Elkana, explained that the incident was a military operation, which went awry, adding that the Police was not involved.

Governor Abubakar Sani Bello, who sent his deputy, Ahmed Mohammed Ketso and the Commissioner of Information, Culture and Tourism, Jonathan Vatsa, to Kpaidna village to get firsthand information about the incident but were prevented from entering the community, has ordered a full-scale investigation to be done regarding the clash.

He also gave the army 24 hours to get back to him with their report.

Bello, who was said to be clearly displeased about the high casualty rate, condemned the clash adding that both sides should have exercised restraint.