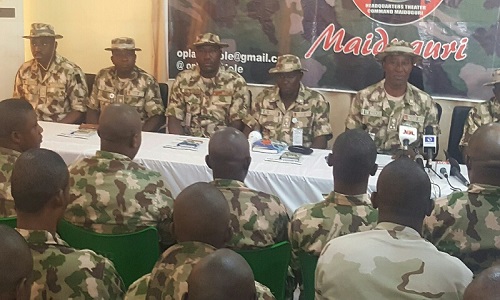 Four officers and 16 soldiers of the Nigerian Army have been arraigned before a court martial on charges of gun-running and murder.

They were arraigned before the military court on Wednesday.

The Acting General Officer Commanding (GOC) 7 Division, Maiduguri, Brig.-Gen. Victor Ezugwu, while inaugurating the court martial at the military media center in Maiduguri, the Borno State capital, warned the president of the court and its members against unnecessary adjournments, while seeing to it that justice is done.

Those facing trial include 2 Majors and 2 Captains as well as 16 others comprising 1 Staff Sergeant, 2 Sergeants, 2 Corporals, 3 Lance Corporals, 7 Privates and a Naval Sea Man.

Their offences include murder, loss of arms, defilement, assault occasioning to bodily harm and  desertion, amongst others.

Speaking, President of the General Court Martial, Brigadier General Segun Adeniyi, assured that justice would prevail during the trial.