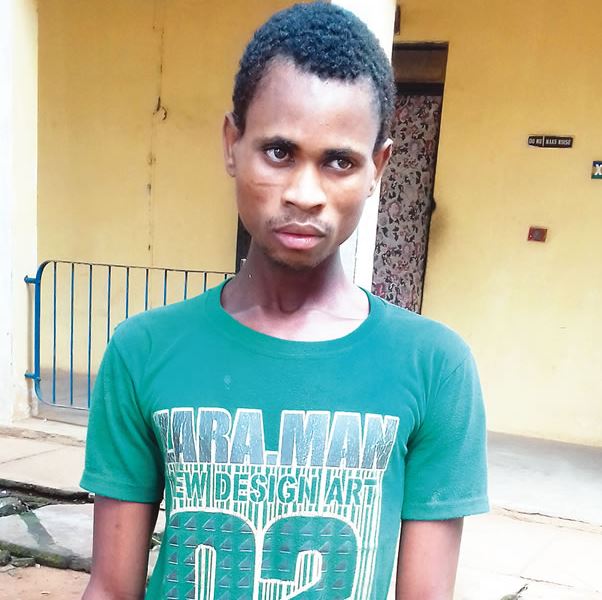 A Fulani herdsman, Abubakar Usman, has been arrested for allegedly killing his 65-year-old mother, Khadijat, and his brother’s wife, Ramatu Shagari, aged 35.

The 25-year-old suspect was paraded on Wednesday at the state police command’s headquaters in Ilorin along with other suspects – Yahaya Umar and Abubakar Saletu – who were reportedly caught with a human head.

Usman, who lived in the Patigi area of the state, told PUNCH Metro that he could not explain what pushed him to the crime. He, however, alleged that his father might have charmed him, adding that he regretted his action.

He said, “I am into cattle rearing. On that day when I woke up, I took N1,000 from my room and took my cows out for grazing. Suddenly, I discovered that the cattle were running away and I followed them. On getting back home, something came over me and I used a knife to stab my mother. I also stabbed my brother’s wife. I believe that my father charmed me. I do not have mental disorder.”

One of the two suspects arrested with a human head, Umar, also confessed to the crime, saying that there had been a quarrel between him and the victim. He added that he colluded with Saletu to behead the victim in a bush.

He said, “There was a conflict among us. We tricked him into the bush and killed him. While we were trying to run away, the police caught us.”

The Kwara State Commissioner of Police, Mr. Olusola Amore, who paraded the suspects, said the crimes were reported to the police by one Abdullahi Adamu of Mamba Fulani Camp, Patigi.

The CP said, “On August 8, at about 1.20pm, information received from Kosubosu Police Division revealed that Umar and Saletu, both of Wobe Fulani Camp, were found in possession of a bag. On interrogation, the bag was found to contain a human head, among other items.

“Further interrogations revealed that the suspects took the head to one Alhaji Kuranga of Muhat Company to buy. The said Alhaji refused and raised the alarm. A search in the bush led to the discovery of a headless body. The victim had been declared missing earlier and the suspects confessed to the crime. The cutlass used in the killing and the human head have already been recovered.”

Amore added that the suspects would be arraigned after investigation.

Meanwhile, the CP has inaugurated the Eminent Persons Forum to assist in fighting crime in the state.

“The forum is aimed at filling the gap and building the capacity, which at all times, will be prepared to join the police in fashioning out ways to confront security challenges in the state,” the CP added.