Nigeria  on Wednesday lost their Rio 2016 semifinal match 2-0  against  Germany at the Arena Corinthians Stadium in Sao Paulo. 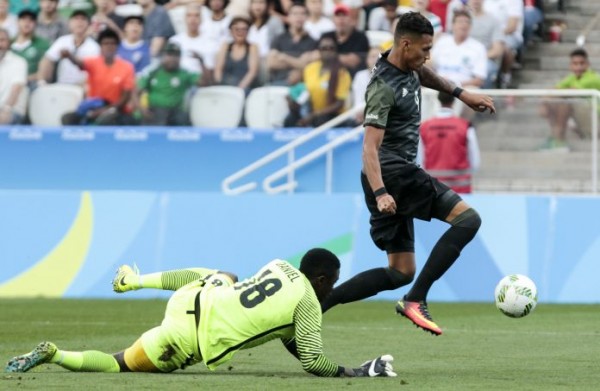 Two goals from Lukas Kostermann and Petersen in the ninth and 88th minute helped Germany  book   a final clash against   Brazil  on  Saturday. Brazil defeated Honduras 6-0 in the first semifinal. Neymar scored twice, including the fastest goal in Olympics history.

Nigeria will now play for bronze against Honduras on Saturday.

The national Under-23 team coach Samson Siasia retained Emmanuel Daniel in goal with Sincere Seth, Stanley Amuzie, Shehu Abdullahi and William Troost-Ekong were in defence. Ndifreke Udo replaced Azubuike Okechukwu, who was suspended for the match, in the midfield. Mikel Obi and Usman Muhammed completed the midfield while Sadiq Umar, Imoh Ezekiel and Umar Aminu were in the attack.

Following their 2-0 victory over Denmark in the quarterfinals, the Nigerians began the match in a fast-paced fashion but could not match the faster Germans, who looked more business-like.

The Europeans  dictated the pace of the game and got their lead in the ninth minute through Klostermann after the Nigerian defence could not deal effectively with the German attack led by Arsenal’s Serge Gnabry.

Nigeria were gifted a big chance by the German goalkeeper to equalise three minutes later when his poor clearance fell to Sadiq inside the box, but the keeper blocked the effort.

In the 20th minute,  Daniel made a point-blank save off Lars Bender to keep his team in the game and at halftime, Aminu’s effort on goal was blocked by a German tackle inside the box.

The second half saw an improvement in the Nigerian defence but they failed to trouble the German goalkeeper. Chances were fluffed by the two teams but the closest Nigeria went was in the 81st minute when Amuzie ballooned a free-kick.

Siasia brought on Junior Ajayi for Umar and Saliu Popoola for Ndifreke but they did little to change the game and in the dying minutes of the game, the Germans got the second goal through substitute Petersen tapped home from close range.

Nigeria won gold at the Atlanta ’96 Olympics. The team won silver at the Beijing 2008 Olympics under Siasia.