Home News Feed ‘Going to prison was a golden moment for me’ – Man who...
Facebook
Twitter
WhatsApp 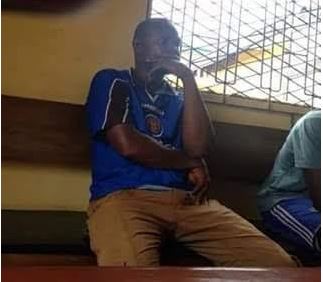 40 year old Chinakwe Joachim Iroko who was arrested and arraigned for naming his dog Buhari, says his stay at the Ibara prison in Ogun state was a golden moment for him. He fulfilled his bail condition yesterday and was released from prison custody…

“I am so happy. It is a joy to me. I have missed my family; that was most painful. Prison is a place to experience in one’s life. It is like a rehabilitation home: you learn many things there and there are many people you may not have the opportunity to talk to. But in prison, you will sit down with them and discuss.
There are many things you take for granted, but when you go to prison you know there is law. The only thing I am regretting about my coming to prison is the intimidation from the Hausa community. Going to prison is a golden moment for me.” he told Vanguard

According to him, he has two other dogs he named after US President Barack Obama

‘I have Obama, Joe’ Explaining why he named his dog Buhari, he said: “As a matter of fact, they misunderstood me. I have three dogs: one bears Obama, one bears Joe, an abbreviation of my name. The third is named Buhari. I named these dogs after my role models. My late dog was named after Nelson Mandela. I don’t just give any name to my dogs. I give reputable names to my dogs. It is love I have for Buhari; he is my role model. Buhari is not the President of the North. He is the President of Nigeria. I see no reason why Northerners should intimidate me: Nigeria is one. I see no reason why they will be intimidating me. It is my right to name my dog any name. Thank God, I have regained my freedom. The most painful thing is the way they treated my dog. I am not happy that they killed my dog, while I was in detention. It is my dog, it is my pet. I love my dogs. They have no right to kill my dog. Nigerians should know that there are other dogs in other areas that bear Jack as name. Why is Buhari so special. It is a name that has been existing for several years.”