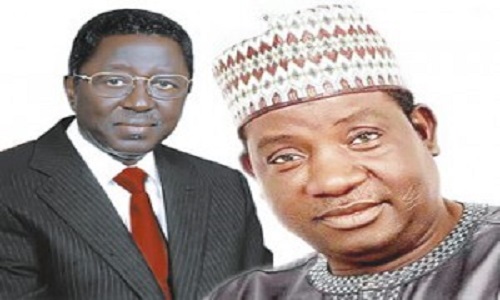 The immediate past governor of Plateau state, Jonah Jang yesterday accused his successor, Simon Lalong of hiding under the reconstruction of the Jos Main market to defraud the state.

The Jos Main Market popularly called Terminus, which is one of Nigeria’s oldest and largest indoor market, was closed in 2002 following an explosion that sparked a major fire incident.

Governor Lalong had promised to rebuild the popular market as part of his campaign promise in the build-up to the 2015 general elections after successive administrations in the state failed to resuscitate it.

In fulfilment of that promise, the state government recently signed a N230 million memorandum of Understanding with a British company to commence the first phase of redevelopment and enhancement of the market.

Jang said “someone has to explain how consultancy fee for the proposed rebuilding of Jos Main Market alone costs about N250million”.

In a statement signed by his media aide, Clinton Garuba, the former governor now senator representing Plateau North, said “Those who have identified the burnt Jos Main Market as a conduit to siphon scarce resources needed to salvage citizens from untold hardship, have a lot of buying to do, so the right questions may be kept from the people”.