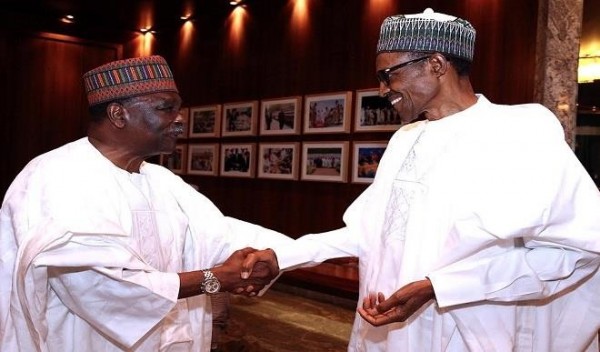 A former Head of State, General Yakubu Gowon (retd.) yesterday met President with Muhammadu Buhari behind-closed-doors at the State House, Abuja, over the state of the nation.

The former military ruler, who Calls For Restructuring Of Nigeria In Order If… – Gowon recently supported the call for restructuring provided it is done within the context of one Nigeria, told State House correspondents at the end of the meeting that he discussed with Buhari on the fate of the abducted Chibok schoolgirls, the renewed militancy in the Niger Delta and the ongoing anti-corruption war.

Mr. Gowon agreed that corruption was one of the problems that had created serious setbacks to Nigeria both nationally and internationally.

“We discussed the general affairs of the country, the problems of the country, his fight against corruption and all the efforts he’s making to deal with it and of course, the impatience of the public to see results of the fight which have yet to be found, since people have not been prosecuted yet, that would soon begin.

“These are some of the issues we talked about. One appreciates his efforts and determination to rid the country of corruption which is one of the problems that have held the country down and created serious setbacks to the country both nationally and internationally and of course, the current situation about the Chibok girls and the efforts the government is making to rescue them.

“He (Buhari) said the government needed to get credible information about the whereabouts of the girls and also those that would assist the government achieve that. I believe that the government is certainly determined to ensure that a number of these girls are brought back home safely as soon as possible. To achieve that, certain credibility must be established of our sources of information on their location, but as at yet, no one knows where these girls are, and all the information that you’ve been getting, I don’t know their sources; but all efforts at engaging the international media and sources are necessary so that this matter can be resolved once and for all”, he said.

The elder statesman expressed optimism that with the government’s current efforts towards negotiating with the Niger Delta militants, all would soon be well in the region.

He also reminded Nigerians that the current economic hardships was a fallout of the crash in crude oil prices in the international market.

On his mission to the State House, his first since President Buhari took over on May 29, 2015, Mr. Gowon said “I’ve come to see the president, to say hello to him, I hadn’t seen him for quite some time. This time, I’ve come to see him to pay my respect to him and to let him know that I’m going out of the country on vacation to the USA and UK”.