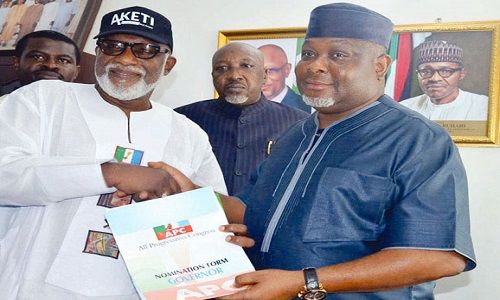 The group, which is also the campaign organization of an APC governorship aspirant in Ondo State, Mr. Segun Abraham, faulted a comment credited to Akeredolu that Tinubu was trying to impose Abraham on the party but that he will fail.

Akeredolu allegedly made the comments while appearing as guest on a programme tagged: ‘Guest of the week’ on an Akure based station, Positive 102.5 FM on Thursday.

The former Nigerian Bar Association (NBA) National President was quoted as saying: “We can say it here, so it is not new today that Bola Ahmed Tinubu says he want to support Abraham, he argued for him in 2012, but God chose me in 2012. So if he is now supporting him today, that is a repetition and God will still choose me this time”.

A statement issued by the spokesman of the group, Kola Ademujimi said: “The whole world could attest to the fact that (2012) election was a battle between Governor Mimiko and Asiwaju Tinubu. There was no statement credited to Mimiko and his campaign team where Akeredolu was condemned, because they knew him as a political featherweight and neophyte”.

Ademujimi added: “All their arsenals were directed at Tinubu and the only campaign slogan reverberating on the lips of Mimiko was that Akeredolu was about to be imposed on Ondo people by the former Lagos governor, so that they can loot the state and make Ondo an extension of Lagos political empire.

“Another imperative question to ask the Senior Advocate (Akeredolu) is that, what was his political antecedent for the likes of political heavyweights like Senator Ajayi Boroffice, Segun Abraham and many others to have stepped down for him at the primary? This was made possible because of Tinubu’s persuasion and the entire world knew except an ingrate like Akeredolu”.

He further stated: “I know that this comment will go a long way in shaping the minds of the 3,000 APC delegates that will participate in the Wednesday primary about the personality of Akeredolu and his ilk, who threw jibes and tirades at their benefactors just because political scheming of the moment is not in their favour.

“I wonder if Akeredolu, who woefully lost in his unit in Owo during the election could have won up to ten wards instead of the three local governments he won, if those, who sacrificed their ambitions for him to emerge the ACN candidate had taken this perilous path he is treading. I want to advise Akeredolu to rely on names calling to whip up sentiments to get the supports of the delegates, because this strategy will fail as delegates will reject him based on his unstable character as manifested in his behaviour and open confrontation with party leaders”.