When Apostle of the Most High and Senior Pastor of Omega Fire Ministry, Prof Johnson Suleman in January 2016 prophesied that he saw blood flowing in Benue State, many people took his prophesy with a pinch a salt. However, with less than four months to the end of 2016 IDOMA VOICE can count up to over 50 persons that have been buried ‘untimely’ under current the leadership of Benue State government.

Many of the victims died as result of poor security in the state.
While some were killed by cult-related activities, others were abducted and murdered by their kidnappers. Following the worsening insecurity situation in the state, many residents have resorted to jungle justice as any criminal caught were lynched to death and set ablaze.

When Ortom took over the mantle of leadership in 2015, he vowed to flush out terrorists from the state by declaring amnesty for criminals, but the programme seems to have hit the rocks as crime-related activities still reign in the food basket state. 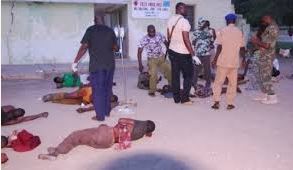 Here are pictures of some persons who lost their lives recently,