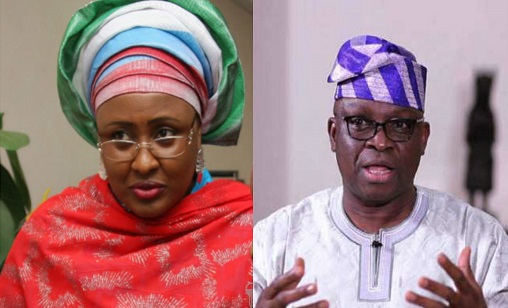 The wife of the president, Hajiya Aisha Buhari, who is on a week-long visit to the United States of America to hold discussions with aid organizations on how to help the women and children facing starvation in the north eastern part of Nigeria, has given reasons why she sued Ekiti State Governor, Mr. Ayodele Fayose.

Fayose had in a statement issued in June, following the freezing of his bank accounts by the Economic and Financial Crimes Commission, EFCC, accused President Muhammadu Buhari and his wife of corruption, saying a massive estate in Abuja belonging to the president was known to him.

He also alleged that Mrs. Buhari was indicted in the U.S in a bribery case involving a convicted former American congressman, Williams Jefferson.

“Even the president cannot claim to be an angel”, the governor said, adding that “The estate he (Buhari) built in Abuja is known to us. His wife was indicted over the Halliburton Scandal (sic). When that American, Jefferson, was being sentenced, the president’s wife was mentioned as having wired $170,000 to Jefferson. Her name was on page 25 of the sentencing of Jefferson. We can serialize the judgment for people to see and read”.

SEE: Fayose Is A Coward For Hiding Under Immunity To Avoid Prosecution – Mrs Buhari

In spite of her denial and call on Mr. Fayose to retract the allegation and apologize, he refused, insisting Mrs. Buhari was the one mentioned in the famous Jefferson bribery case and dared the wife of the president to visit the U.S if she was not guilty.

Following the expiration of an ultimatum she gave the Ekiti governor to retract his allegation and apologize for falsely accusing her of being involved in the Jefferson bribery scandal, Mrs. Buhari on July 20th, 2016 through her counsel, Mary Ekpere-Eta of Mary Ekpere & Co, Legal Practitioners, filed a N5billion defamation lawsuit against him.

Opening up for the first time outside legal documents filed on her behalf in court on why she sued the governor, Mrs. Buhari, in an interview with the Hausa service of the Voice of America, VOA, on Saturday, said it was because he attacked her for no reason, while also raising false allegations against her.

She said Mr. Fayose had been insulting her and the president since during the 2015 campaign.

“At the time, he was not the only one insulting us, but people felt that it was just campaign”, Mrs. Buhari said.

“After the election, which we won and they lost, everyone else moved on except him and he extended his insults to me.

“I did not run for president. I am a married woman and I have never called his name. I never knew him. But as governor and chief executive, he kept insulting and raising false allegations against me, I have to respond and I decided to go to court.

“He made allegations over what he said I did here in the US, even though I have never met the people he mentioned”.