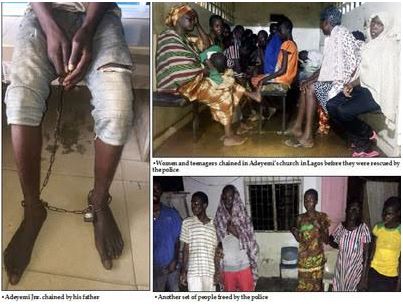 Police over the weekend, arrested 70-year-old pastor  Emmanuel Adeyemi for allegedly chaining his son and 27 others.
Adeyemi was arrested alongside his first wife, at his Oyinbo Unity Estate, Olamidun Close, Yakoyo, Oke-Ira, Ojodu residence, following a tip-off that his 17-year-old son, Toba Adedoyin Adeyemi was chained and starved of food.

13 children and 15 adults were also rescued from the premise. Most of the victims looked malnourished with some of them severely ill. Lagos State Police Command’s spokesperson, Dolapo Badmos, who confirmed the incident said:

“Further search of the premises led to the discovery of other people chained by the suspect. Total number of 28 persons, comprising, six adult males, nine adult females, seven female children and six male children were rescued and taken to protective custody.”

When The Nation visited the church, some of the pastor’s clients was seen weeping over his arrest. Two men and an aged woman claimed that the suspect has been healing people of various ailments including mental disorder, diabetes, stroke and spiritual attacks. The woman, Mosili Nosiru said that her son, Mohammadu Tijani, was among those taken away by the police. She explained that the boy, who was a university undergraduate, has been battling with mental disorder for eight years.

“It has been on and off since eight years. He has finished Quaranic School. When it stopped, he gained admission but the problem started again. So, we brought him to this place and he was healed. But he relapsed and we brought him back. He has been here for over one year and he was getting better before government officials came and took them. They told us they have taken our children to Ikorodu. Now, I can’t see my son,” she cried

Another man claimed that the ‘pastor’ has been healing him from ‘spiritual arrows’.

“I have been coming here for about two months. I knew him after someone introduced me to his place. The man is a ‘doctor’. He heals people with herbs and sacrifices. He does not do anything bad. He is also very generous. Arrows were sent into my body but he helped me and removed them. If not for him, I would have been dead. So many people, including big men come here for spiritual work,”  he claimed.

The suspect’s second wife, Tope Adeyemi, appealed to the government to release his husband, insisting that he only tied up his son because he wanted to deliver him from a wandering spirit.

“His father chained him on Thursday so that he can do three-day deliverance on him. The deliverance would have been completed on Saturday but on Friday morning, policemen from Area G came here and arrested my husband. He chained Toba because he is always running away from home. The other time he ran to Shagamu and after sometime, he was brought home. One week later, he ran to Ibadan and he was found after one month. The last one was to Powerline. He ran from home and went to Powerline. He stayed there for two weeks and was brought home. His father became worried because he used to be a very gentle boy. So, he chained him because he believed that it was a spiritual attack and wanted to do three-day deliverance on his son. My husband is not a criminal. He does not do anything bad. He only heals people and helps people. He has licence for the business. They should please release him”, Mrs. Adeyemi said.