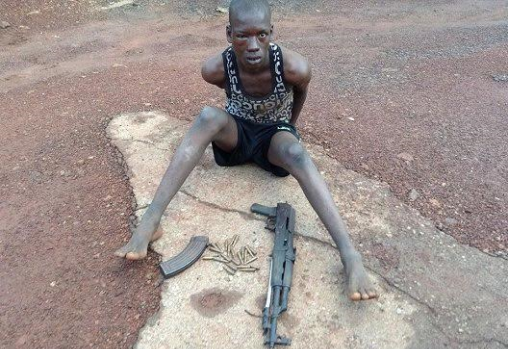 The Enugu State Police Command has arrested a 20-year-old herdsman, Ibrahim Adamumale, for being in possession of an AK47 rifle.

The suspect, who said he was an indigene of Nasarawa State, was also found with 24 rounds of live ammunition.

The spokesman of the Police Command, Ebere Amaraizu, confirmed the arrest to the News Agency of Nigeria (NAN) on Tuesday in Enugu.

Mr. Amaraizu said the suspect, who revealed that he lived at Hausa quarters in the 9th-mile area and had some cows at Affa-Udi bush, was arrested on Sunday.

“The suspect was nabbed by the combined efforts of the police and the members of the public from Affa-Udi community acting on a tip-off.

“The suspect, before he was nabbed, had expended about six shots in the air to evade being nabbed.

“Before now, the police and members of the public have gathered information about the suspect’s antecedents in relation to the bearing of a sophisticated weapon within Affa-Udi axis in Udi council area and its environs”, the police spokesman said.

Mr. Amaraizu said the suspect was already helping the police in their investigation to determine how he came about the rifle.

He said the state’s Commissioner of Police, Emmanuel Ojukwu, had expressed delight at the effort of his men and the community that led to the arrest of the suspect.

“The Commissioner has reassured that under his watch, he will continue to partner relevant stakeholders and sister security agencies for a safe, secure and peaceful Enugu State”.