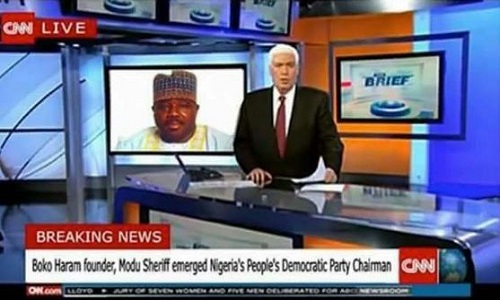 Lawan had last week at the Nigerian Bar Association (NBA) conference in Port Harcourt, Rivers State, called on the authorities to probe the role played by Sheriff in the Boko Haram insurgency while he was governor from 2003 to 2011.

Reacting, Sheriff reportedly asked Lawan to publish facts in support of his connection to Boko Haram or risk litigation.

The former governor, in statement issued by his Special Adviser on Media, Mr. Inuwa Bwala, asked for immediate retraction and apology from the Borno Attorney General, saying there was never a commission of enquiry, instituted by the state government or federal government, which found him (Sheriff) culpable, neither has there ever been a security report that indicted him.

But Lawan, in statement on Sunday, listed the “40 facts” to support his claim, which he said were ether unknown to many or were simply ignored or suppressed.

According to him, in 2008, Borno under Sheriff established a special joint police and military anti-robbery squad called “Operation Flush”, with the commander reporting directly to the governor rather than the Commander of the 21 Armoured Brigade in Maiduguri.

Tracing the origin of violent extremism in the Northeast state, Lawan said on June 11, 2009, a detachment of Operation Flush intercepted a group of Boko Haram members then known as “Yan Yusufiyya”, who were on a funeral procession and sought to know why they rode on motorcycles without wearing crash helmets as was the law in the state.

“An armed member of the Operation Flush eventually opened fire on 17 members of the Boko Haram sect with some of them sustaining fatal shots and were admitted at the University of Maiduguri Teaching Hospital”, he said.

He said the state government disregarded the incident and did not condemn it, with the sect’s founder, Malam Muhammad Yusuf, now deceased, threatening a reprisal attack in a newspaper interview.

“A day or so after the interview, Yusuf delivered a sermon in Hausa language,  titled, ‘Open letter to President Umaru Musa Yar’adua’ and directed his followers to go and arm themselves in preparation of self-defense and eventful Jihad in response to the shooting of his 17 followers.

“Even while Muhammad Yusuf issued this directive and threat for Jihad, Governor Ali Modu Sheriff still disregarded the possible room to make peace with the sect”, Lawan said.

The Attorney General further recalled that on July 21, 2009 nine members of the sect were arrested for possessing 74 empty bomb shells and materials for improvised explosive devices, which they said was in preparation to defend themselves against Sheriff’s Operation Flush.

He said a counter-insurgency operation was launched by the Federal Government, with soldiers deployed to Maiduguri, targeting Yusuf’s enclave, which is the sect’s headquarters.

“After the sect was dislodged, Sheriff invited traditional ward heads and ordered them to point at houses belonging to fleeing sect members with most of the houses brought down”, Lawan said.

He also disputed claims by the PDP strongman that the Boko Haram attacks preceded his (Sheriff’s) tenure as governor of Borno State.

He said: “Shortly after winning the 2003 elections, Ali Modu Sheriff created the Ministry of Religious Affairs under a pioneer Commissioner, Buji Foi with who was later found to be one of the financiers of the sect under Yusuf. However, Sheriff didn’t introduce Sharia.

“Whereas Sheriff has always claimed that the violence of Boko Haram preceded his administration, what is a fact in October, 2003, part of the Boko Haram members, then known as Taliban, broke away from Muhammad Yusuf claiming that they could no longer live in a place that wasn’t being governed by Sharia law and this was some months after Sheriff took oath of office on May 29, 2003.

“The breakaway faction called themselves ‘Taliban’ led by someone nicknamed Mullah Umar. They set up a base outside Kanamma, a village in Yobe state, located on the border between Nigeria and Niger Republic. They nicknamed their new base ‘Afghanistan’. They declared the new base a sovereign State under Sharia law.

“On 5th of July, 2011, former Governor Ali Modu Sheriff tendered an apology to the Boko Haram sect ‘for whatever he might have done wrong to them’. Why did he apologise if he knew he did nothing wrong to the sect”, Lawan asked.