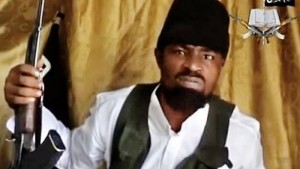 BBC has reported that Abubakar Shekau, the disputed leader of Boko Haram, has said he is still in charge of the militant group.

This comes after the declaration of a new leader by ISIS yesterday.

Shekau is said to have denounced the ISIS declaration that Abu Musab al-Barnawi is now the leader of the jihadist group.

Shekau in an audio message accused al-Barnawi of trying to stage a coup against him.

He said that some in Boko Haram had stopped him communicating with al-Baghdadi.

“I was asked to send my ideology in writing to the caliph but it was manipulated by some people in order to achieve their own selfish interests,” he said.

He said he had sent 8 different letters to ISIS leaders but they did not act on them, only to hear the news that he had been replaced.

He then described al-Barnawi and his followers as polytheist.