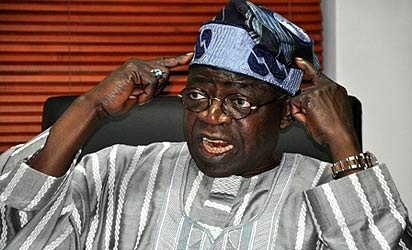 A former National President of the Nigeria Bar Association, and now governorship aspirant on the platform of the All Progressives Congress (APC) in Ondo State, Chief Rotimi Akeredolu, has denied reports that he made uncomplimentary remarks against a national leader of the party, Senator Bola Ahmed Tinubu.

A group, Ondo Collectives for Change, had blasted the APC governorship hopeful for ‘insulting’ Mr. Tinubu while appearing as guest on a programme tagged: ‘Guest of the week’ on an Akure based station, Positive 102.5 FM on Thursday.

In a statement issued on Friday, Mr. Akeredolu said he did not insult the APC leader over the alleged imposition of candidate on the party, saying reports to the contrary, were untrue.

The statement reads: “My attention has been drawn to some stories making the rounds especially on the social media linking me with some ridiculous comments and incendiary quotes on the purported endorsement of candidates in the governorship primary.

“Those who know my antecedents will attest to the fact that I am a man of courage.

“For the avoidance of doubt, I did not insult any of our national leaders in APC, especially Asiwaju Bola Tinubu as quoted mischievously in the social media”.

According to the aspirant, he stood by the assurances given by the leaders of the party that there would be free and fair primary.

“What is happening in Ondo state right now is that some leaders are using the name of Asiwaju Tinubu to cause confusion; claiming that he had given them money to work for a particular aspirant”, Mr. Akeredolu said.

“Anybody doing such cannot be described as a leader. Asiwaju Tinubu’s last communication on Ondo State Governorship primary was that there will be free and fair primary”.