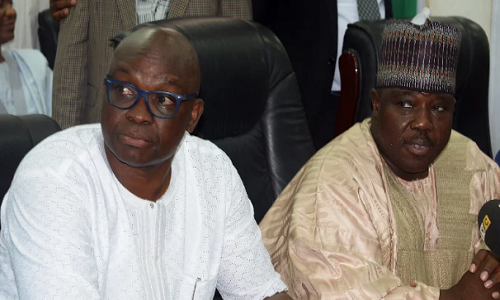 Governor Ayodele Fayose of Ekiti State has expressed regrets that he ever foisted Senator Ali Modu Sheriff on the Peoples Democratic Party, PDP, as its national chairman.

Mr. Sheriff, a former governor of Borno State, was supported by Governors Fayose and Nyesom Wike of Rivers State to become national chairman of the PDP, against the wish of a larger section of the party.

He was in the run to retain the seat during the May 21, 2016 national convention of the party in Port Harcourt, Rivers State but following some alleged political mistrust, the governors, who imposed Sheriff on the party, withdrew their support and announced his removal. They also appointed a former governor of Kaduna State, Senator Ahmed Makarfi, as National Caretaker Chairman for a period of three months.

The former Borno governor, however, rejected his sack, insisting he is the national chairman of the PDP. His insistence to remain in office, has since plunged the main opposition party into a leadership crisis with attendant court cases to determine the authentic leadership of the party.

Ruing the role he played in the entire saga, Mr. Fayose on Sunday said he would not openly identify with or campaign for any of the aspirants for the position of PDP national chairman in the August 17, 2016 national convention in Port Harcourt.

He spoke at the Jibowu Hall, Government House, Ado-Ekiti, when an aspirant for the national chairmanship of the party, High Chief Raymond Dokpesi, visited the state in continuation of his nationwide tour to campaign for the position.

His words: “I must tell you that I have learnt my lessons from my past experience. I will not openly identify or campaign for a candidate any longer. As part of our great party in Ekiti, I am assuring you that I do not have a personal candidate and God knows I have not spoken to my people about any candidate.

“We will allow God to choose for us this time by ensuring that all aspirants have a level-playing ground.

“I have learnt my lessons on Ali Modu Sheriff and I take full responsibility for the consequences. Imagine, if we have allowed him to get there, with the way he is now behaving, it would have been worse than this”.

The governor lamented that in regards to the crisis rocking the party, some people were merely paying lip service to reconciliation efforts in the PDP because of selfish interests.

He also decried the recourse to litigation over internal affairs of the PDP.

“Dry bones of the PDP will rise again”, he declared. “God will give the PDP a new leader that will reposition the party to progress in the country”.

“In Ekiti, we have no anointed candidate; we would come to Port Harcourt with open mind and let God do justice”, Gov. Fayose assured.

Earlier, Mr. Dokpesi pleaded with the stakeholders to allow him to serve the party, assuring everyone that he is a great leader, a transformer and a bridge builder, who will promote, protect and project the PDP towards the path of growth.