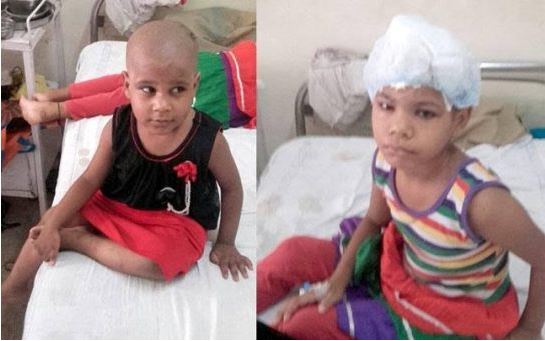 Police have rescued two young sisters, 8-year-old Himanshi and 3-year-old Deepali, from a small house in North-west Delhi, India after they were abandoned by their parents for being girls. They had been locked up inside their home for days before neighbours alerted Delhi Police.

When the house was broken into, the two sisters were found starved and lying on a broken cot holding each other’s hand. Himanshi had deep wounds on her head and Police personnel who went to rescue them noticed worms coming out of the injuries.

The house was stinking, full of flies, mosquitoes and had no ventilation. The children who could barely survive were quickly rushed to Bhim Rao Ambedkar Hospital, Rohini, where they are under doctor’s observation.

Police investigation revealed that their parents 35-year-old Bunty and his wife, Rajni have three children. Besides the girls, they also have 5-year-old son.”For past some time, Bunty was jobless and had taken to drinking. The family barely met both ends. Frustrated over financial difficulties, Rajni left the home with her only son leaving behind her two daughters at the mercy of drunkard and jobless husband. Bunty didn’t work, instead, cursed the two girls for having born to him. He could not give the girls food. Finally, on 15th August, when the entire country was celebrating attainment of freedom from British rule, he locked the two little girls to die of starvation and went away. Already starved for two-three days, Himanshi and Deepali were in extremely bad condition when the landlord and the neighbours sought help from police on 19th August.”

After the girls were rescued, the police found out they had a grandmother. They searched for her and found her in an old age home. The 80-year-old woman however revealed that she was driven out of home by Bunty a few years ago. She wandered for some time on streets before she found shelter at the care home. However, although the condition of the girls were explained to her, she refused to take care of them.

Although their parents have not been found, the Delhi Child Welfare Committee, have agreed to send the girls to a rehabilitation centre.