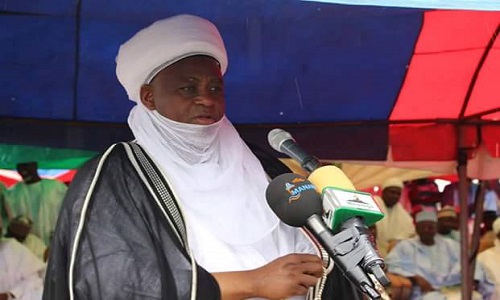 The Sultan of Sokoto and President-General of the Nigeria Supreme Council of Islamic Affairs, NSCIA, Alhaji Muhammad Sa’ad Abubakar III, has denied speculations in some quarters that there is a grand plan to turn Nigeria into an Islamic State.

He insisted that it is not possible for a multi religious nation like Nigeria to either be Islamized or ‘Christianised’.

The Sultan spoke on Friday at the commissioning of the International Centre for Inter-Faith Peace and Harmony’s office in Kaduna.

Abubakar III, who is also a Co-Chairman of the centre, pointed out that no country survives religious war; hence, Christians and Muslims in Nigeria must imbibe the culture of peace and peaceful co-existence.

He also advised that ethnic and religious crisis in the country should become a thing of the past, adding that, “No country survives war or war stimulated by religious intolerance”.

SEE: Wearing Hijab Is A Right, Not A Privilege For Muslims – Sultan

According to him, the practice of religion should be voluntary and not by force.

“We have seen countries where people are killing one another; obviously, there can be no peace in such countries. Killing is not part of the teachings of the holy book”, he stressed.

The Sultan also enjoined Christians and Muslims across the world to desist from making comments that anybody is out to Islamize Nigeria.

“Nigeria has a Muslim president and before him was a Christian president. We must see ourselves as one big family, without that, we cannot have peace. It is not possible to Islamize Nigeria, if God had wanted, He would have created all Christians or all Muslims, we are not secular but a multi-religious state because the people are so religious. We must respect one another and understand the tenets of the two religions”, he asserted.

Similarly, the Governor of Kaduna state, Nasir El-Rufai, decried the series of crises that had erupted in the state; lamenting, that the state has been divided along religious lines.

He mentioned that religion is no longer a matter of life after death but business; adding that those who operate the religious business make money by promoting division.

“We must de-emphasise our differences and promote peace”, he stated.

While he stressed the importance of the Centre situated in Kaduna, Gov. El-Rufai declared the state government’s commitment towards ensuring that the message of peace and inter-religious harmony is taken to a higher level.

Earlier in his remark, the General Secretary of The Christian Council of Nigeria (CCN), Reverend Dr. Yusuf Ibrahim Wushishi, noted that by nature, religion plays a vital role in purposeful leadership, community building, social justice, law and order among others.

“Our obligatory responsibility as faith based community in Nigeria is to respect our religious differences. In our diversity as a nation, we are bound to opt for bonds based on our common humanity”, he added.