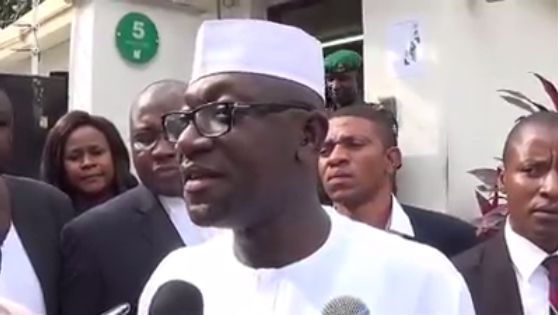 The former Chairman, Appropriation Committee of the House of Representatives, Hon. Abdulmumin Jibrin, has introduced a new dimension to his budget padding allegations, claiming that embattled former Senator Iyiola Omisore is involved.

Omisore, a Peoples Democratic Party, PDP, chieftain, who represented Osun East senatorial district, was a former Chairman of the Committee on Appropriation in the sixth Senate.

Jibrin, in a letter to the National Chairman of the All Progressives Congress (APC), Chief John Odigie-Oyegun, in which he urged the party chair to advise Speaker Yakubu Dogara to resign, claimed there was an unholy alliance between the Speaker and Omisore.

In the letter, dated August 12, the member representing Kiru/Bebeji Federal Constituency of Kano State, said Dogara’s exit would enable the House “nominate a Speaker Pro Tempore and mobilise our members to support him to take over and adjourn the House until when we are due for resumption in September”.

“This will give room for consultations on the election of a new Speaker when we resume”, he said.

The Kano federal lawmaker urged the party “to discuss on the possibility of returning the N100 billion constituency component of the budget under any of our laws so that all stolen money can be returned, particularly the N40 billion naira and equitably distributed to all constituencies”.

In a new twist to his barrage of allegations against the Speaker, Jibrin said: “His godfather is Senator Iyiola Omisore. During the build up to the appointment of committee chairmen, I had a terrible disagreement with him (Dogara)”.

According to him, while in London, before the appointment of committee chairmen, Dogara “pleaded with me to join him at a house in London. I went and I saw him seated very comfortably with Senator Omisore. It was there he said he was going to appoint me as chairman, Appropriations and I should be reporting to Omisore

“I was completely shocked. A nice lunch was served; we ate and we left. At least, there are CCTVs in London. I confided in a highly-placed person who I wouldn’t want to mention his name. He advised me to remain calm and concentrate on my job. My refusal to comply with such questionable instructions largely accounted for the anger of Mr. Speaker towards me.

“It was much later that I realised that Senator Omisore had adopted Speaker Dogara as a godson since their days as Chairman Appropriations and House Services in the sixth Assembly respectively”.

Jibrin said Dogara was “more interested in telling me about the forces who didn’t want me to be appointed chairman appropriations as if I cared. He mentioned former Speaker and present Governor of Sokoto State Aminu Waziri Tambuwal as one. That is how narrow-minded Dogara can be”.