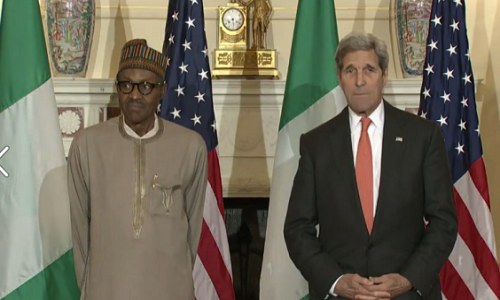 The U.S secretary of State, John Kerry is in Nigeria on an official two-day visit in an effort to improve diplomatic relations between both countries.

Both countries are collaborating to put an end to the deadly terror group, Boko Haram. John Kerry will visit Abuja and the Northern city of Sokoto as he is also expected to touch on the issue of Nigeria’s fragile economy.

On Tuesday, the Nigerian army said in a statement that 300 top Boko Haram officials died in an airstrike and that the leader of the sect, Abubakar Shekau was fatally wounded.

Kerry stated while visiting Sokoto that it is important for the government to keep in mind that religious extremism cannot be quelled through fear.

“We also know that beating Boko Haram on the battlefield is only the beginning of what we must do,” Kerry said

“Building public trust in government also requires cooperation from the military and law enforcement. Extremism can’t be defeated through repression or fear.”