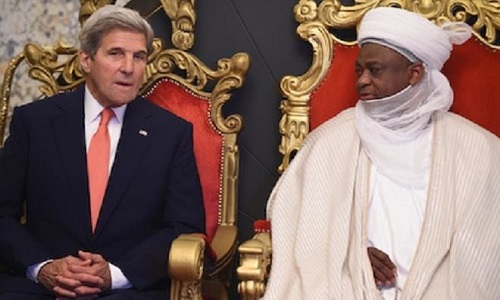 Mr. Kerry, who was at the Sultan’s Palace in Sokoto yesterday as part of activities lined up during his visit to Nigeria, delivered a speech titled: “The importance of resilient communities and religious tolerance in countering violent extremism”.

In the speech, the visiting U.S Secretary of State noted that Nigeria’s strength lies in its diversity of culture and religious tolerance just as he extolled the virtues of former leaders of the defunct Sokoto caliphate, including the late Sardauna of Sokoto, Sir Ahmadu Bello, who he said stood by the virtues of peace, unity and tolerance.

He acknowledged President Muhammadu Buhari’s bold efforts in fighting insurgency and other crimes across the country, saying: “Boko Haram boasts of no agenda more than to burn schools. They also kill and maim people, especially teachers, and it is the opposite of any religion”.

Kerry hailed the Sultan Abubakar for his efforts to entrench peace, unity and prosperity in Nigeria and beyond and welcomed the Sultanate Council’s plan to establish an all-women university.

In his reaction, Mr. Fani-Kayode took to his Twitter handle to slam Mr. Kerry for hailing the Sultan for promoting religious tolerance and understanding among Nigerians.

I listened to the garbage that @JohnKerry said to the Sultan. May God forgive him. All I can say is that I pray that @realDonaldTrump wins.