Kenyan Church Members In A Mortuary To ‘Resurrect Dead People’ 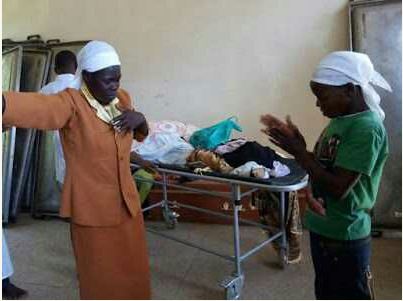 There was drama at a Kenyan hospital – Webuye county hospital on Saturday when faithfuls from Temple of God church stormed the hospital’s mortuary “to resurrect the dead”.

According to five members of the church of more than 200 members, they had been sent by the holy spirit to pray for the sick, heal them and resurrect the dead.

Led by a man who called himself prophet Daniel Wechuli, the three women and two men squad claimed to have healed several people through their prayers, that they have led healing prayers for people living with disabilities and they all got healed.
“We have been moving to various hospitals praying for the sick and most of then have been healed by faith,” Wechuli said.
Prophet Daniel Wechuli said that the holy spirit had spoken to them to come and resurrect people who had died prematurely.
“We are divine people who are anointed by the holy spirit to move to hospitals preaching and healing the sick without asking for any penny,” he said.
“We want to show people the power of God in their lives through our church that has been healing and restoring lives to God,” she said.
Another female member said that their task is only to pray and one’s faith is what matters if he wants to be healed.
“We have been to Malava hospital where we prayed and all the sick were healed and left the ward,” Wafula said.
She said that they started the prayers in July and have been to Vihiga, Kakamega and Malava where they have received overwhelming healing testimonies.

However, no one had resurrected by press time as the group kept on praying. Residents of Webuye jammed the facility to take a look at the strange incident.