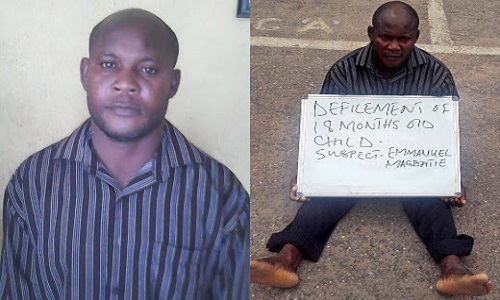 A 47-year-old man, Emmanuel Magbati, who was yesterday arraigned before an Ikeja Magistrate Court in Lagos for allegedly defiling an 18-month-old baby, has blamed the devil for his misdeeds.

Magbati was said to have committed the offence by penetration on the 3rd of August at No 23, Adebayo Owotu Street, Ikorodu, Lagos State.

Counsel to Magbati, Barrister Ayodele Osunkanya, prayed the court to admit the accused to bail on the ground that he was a family man and would be available to face subsequent trial of the matter.

The plea for bail was, however, rejected by the prosecutor, Simeon Imhonwa, who argued that the act was degrading to humanity.

Mr. Imhonwa, an Inspector of Police, said the accused needed to be denied bail for him to realize the gravity of his offence

Presiding magistrate Layeni Lateef Kayode granted the accused bail in the sum of  N500,000 with two sureties, and fixed September 22, 2016 for further mention.