A 25-year-old man who lives as a vampire has said he ‘just wants to be treated like everyone else’. Darkness Vlad Tepes, said he had been living as a vampire for 13 years, sleeps in a custom-made coffin.

He said he had also drunk cow and pig’s blood, as well as a human blood substitute. 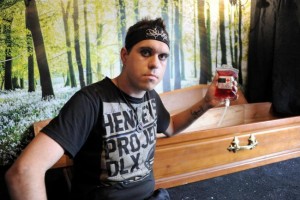 Darkness said until recently he had very few problems from other people.

However, this changed when he went for a drink with friends at a pub in Oswaldtwistle where he said he was openly abused because of the way he dressed.

He said: “I went into the pub with two mates and a lad piped up and asked if I was abused as a child when I was young because of the way I look.

“I felt so ashamed and embarrassed that I would get asked such a personal question based on my choice of lifestyle.

“Everyone has their beliefs and I don’t believe I should be persecuted for following mine.” He added

Darkness said he first became attracted to the vampire lifestyle as a teenager.

As part of his beliefs, he sleeps in a custom made-to-measure coffin that weighs 25 kilos is roughly 6ft 7in long. He is 6ft 6ins tall. 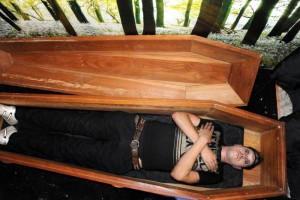 He also has a strict balanced diet which stays away from fatty foods, and drinks cow’s and pig’s blood, as well as a human blood substitute.

He said: “My life was always a secret until I came out two years ago. I first learnt about vampires when I was 13 and growing up in Galway.

“I was taking my dog for a walk through the woodlands and I saw a group of girls dressed up and I thought they were zombies.

“I ran home because I was scared at first, but then I became really curious.

“One day I found them again, and they initiated me into their coven, and I have been a vampire ever since.

“To be a vampire is to believe that I have a living body but a dead soul.

“But I think there’s a lot of preconceptions about being a vampire from films and books like Twilight or Dracula.

“Garlic doesn’t affect me and I can quite happily walk around in the sunlight.

“The coffin is purely a choice option to being a vampire, it’s one that I do because it feels right.”